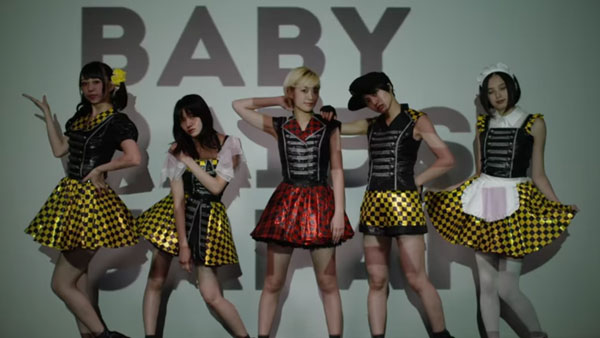 This PV came out a while ago at this point. I meant to do it last week, but the writer’s block was pretty epic. Babyraids Japan is a group I really want to enjoy, but more often than not their music just isn’t my thing. The members are cool for sure, but other than “Koi wa Panic”, I can’t say I’ve felt much for their releases. The Twitterverse exploded about this PV and how amazing it was, so I had to have a look. It’s definitely a more impressive video than their norm, but it is lacking in some ways.

The video relies heavily on its production value, so it’s good that it’s very impressive. Throughout the video, the members are performing in front of projected images of various after-effects, epic performance photos, as well as lyrics and the group name. It reminds me very much of one of DINOSAUR BRAIN’s previous videos, but I would say the execution is superior. The integration between member shots and CGI-only shots is some of the most fluid I’ve ever seen. The effects have a very edgy look to them that fits in very well with the song. Camera shots are right where they need to be and member placement in relation to the effects is done really well.

It’s good they doubled down on one aspect because the rest is nowhere near as well executed. If you really look at what’s going on in the PV, you won’t find much. The dancing and choreography are uninspired, there’s practically no member interaction, and the shots in and of themselves are just a bit bland. Luckily the production is so good that you won’t really notice any of this.

The outfits are nice enough. Most of them feature yellow and black checker print skirts except for Manatsu who’s too cool for school. She gets a much cooler looking red and black one. The tops are mostly black and have a marching uniform-like style on the front. Everyone looks cool enough. There’s plenty of leg action going on if that’s your thing. All in all, this is a pretty damn good PV. Maybe not genre defining, but it’s a huge step up from the usual Babyraids.

The song however is a home run. This is the first time I’ve ever said this about this group’s music: I love this song. It’s hype as fuck. The instrumentals are a truly wonderful more-rock-than-pop song with a really fast tempo. We also get a serving of awesome solo vocals that flow into a really badass chorus. This song’s full of energy and the group executes it perfectly. Despite not being too into most of their previous offerings, I’ve always appreciated their high quality vocals. To see them put to good use really shows how awesome this group can be if given the material.