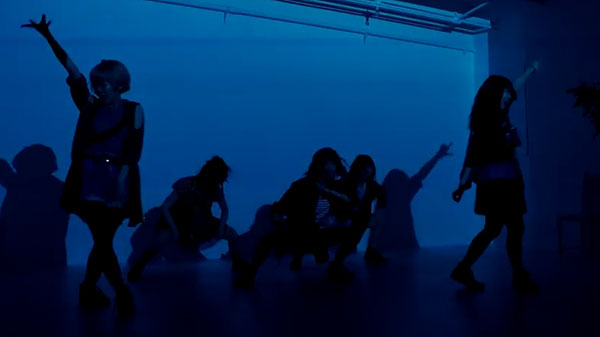 So yeah, this PV was released a few weeks ago, but it seems like I’ve finally hit a slower week, so we’re going with this pinch hitter that I know nothing about. Luckily it’s a nice one.

So it appears that DINOSAUR BRAIN is an EDM group. What a shocker. You never see that kind of thing these days. This group however seems to be what I might call “pure” EDM. It doesn’t feel idolized at all, but rather something you might hear in a typical club. Or so I hypothesize. I don’t go to clubs. I’m not that cool.

In any case, the production for this video is very showy. Transitions and breaks in the shots are constant, coinciding with lyrics generated on the screen either by aftereffects or projected onto the set. It’s actually done in a really good looking way. It does feel pretty attention deficit at times, but for better or worse it goes with the song pretty well.

As I said, I don’t really know this group, but I can definitely give them some props for being a set of pretty good looking ladies. They’re also pretty capable dancers. The choreography does feel a bit disjointed, with a lot of generic dancing mixed in with some epic moves here and there. It’s definitely not boring watching them do their thing in any case. The only outfit to speak of is one set of casual wear which look fashionable and, well, club worthy obviously.

A lot of the PV takes place on the dance set with the projector displaying various lyrics and other things that look like they might have once been a Winamp equalizer. It’s pleasing enough, but some of the cooler shots are the individual member clips filmed in Shibuya. In some parts of the PV I wish the transitions weren’t so quick, but overall everything is filmed decently.

The song itself is pretty hype if you can get into this kind of music. The tempo is much faster than most Japanese-produced EDM music that I’ve heard, and the energy is really good. The instrumentals don’t sound particularly unique, but they’re of decent quality. The vocals seem a bit downplayed, though. I’m not sure if the song just doesn’t showcase them well, or if they are trying to hide some less than stellar vocals, but it’s noticeable that they’re mixed down a bit. Luckily the high energy still make it an entertaining listen regardless.