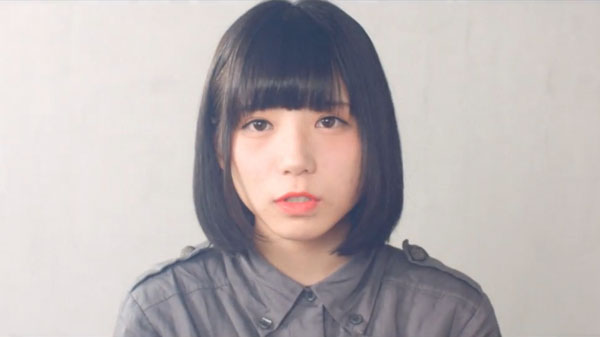 I’m definitely on the BiSH hype train lately. I’ve enjoyed them since their debut much more than I ever got into BiS. Sure, we had a pretty epic disappointment with “DEADMAN”, but their recent album and PV’s have been extremely enjoyable. You should check out Garry’s review of said album. More or less, my opinion is the same as his. New member Ayuni D topped it all off as I had an extreme case of love at first sight with the country girl turned alt idol. Just when I think things couldn’t get better, this PV comes out. Oh man is it GooD SHiT.

There’s so much going on in this video, I can only go through it chronologically. The first noticeable thing is the generous amount of screen and voice time given to Ayuni D. She did write the lyrics, after all. I’m definitely not opposed to seeing more of her as I find her to be one of BiSH’s most attractive members.

Most of her shots are pretty standard singing fare, and she stays sequestered away from the other members until the last part of the video. Her scenes are very memorable. I really like her blank expression in this video. There’s something about it that’s very pleasant if not outright alluring. It makes the times she does crack a smile or bug her eyes out for a more BiSH vibe very fulfilling.

The rest of the PV is chaotic in an awesome way. There’s numerous scenes where the other BiSH members are riding down the streets in shopping carts and being their usual crazy selves. No doubt the pinnacle of these scenes is when Cent Chihiro Chitti and Aina The End start making out.

I’m not even making a joke. For a couple of scenes in the last third of the video, they start repeatedly kissing. It’s not a peck either. It’s playful, flirtatious, sensual, and they both go back for seconds and thirds. Not sure what to say except that it’s super hot. I personally find Aina to be the most attractive in the group, so I am totally down for this action.

There’s also several more briefly shown set pieces in this PV that would take forever to go through, so I will group them together as the “action” of the video. There’s numerous scenes of Aina dancing frantically in a hallway. It’s very BiSH-like and awesome to see. She executes it brilliantly. There’s also some group shots of the girls dancing or otherwise going BaTSHiT in what looks like a clinic waiting room that are pretty fun and in line with the rest of the chaos. There’s also a generous amount of solo shots for the other members and while not quite as wild, they’re fun to watch.

The PV takes us to yet another scene toward the end. They really crammed this video with content, man. The girls swap from their darker uniforms into bright tank tops and jean shorts to get paint blasted. These scenes are a really fun way to wrap up the video. Seeing them trying to carry on amidst the “surprise” paint bombing is amusing, and we get a little fan service from the slightly revealing attire. All I’ll say is nobody in this group has anything to be ashamed of.

Parts of this review are a bit more vague than I’d prefer. There’s so much going on that I would be here all night talking up the video if I dived into every last nuance. What you really need to know is this PV is high quality, high content, has an amazing atmosphere and is brilliantly assembled. The camera work, the effects, the selection of scenes, and the chaotic nature of it all make for an amazingly good PV with tons of rewatch value. It’s truly one of if not the best they’ve done.

As for the song, it’s great too. The instrumentals are rapid pace, chaotic rock with great depth and quality. The vocal work gives Ayuni D a chance to shine without ditching everyone else, and everyone does their part perfectly. While I typically don’t say much on lyrics due to not being qualified to do so, I will say these lyrics flow noticeably well. I’m eager for Ayuni D to pick up the pen in the future.

I think BiSH has successfully avoided the Avex curse and is on a crash course with being my personal flagship alternative idol group. They may not be the most wild group of this subgenre anymore, but they’re definitely the most likable.

Yeah there’s two five stars this week. Deal with it.