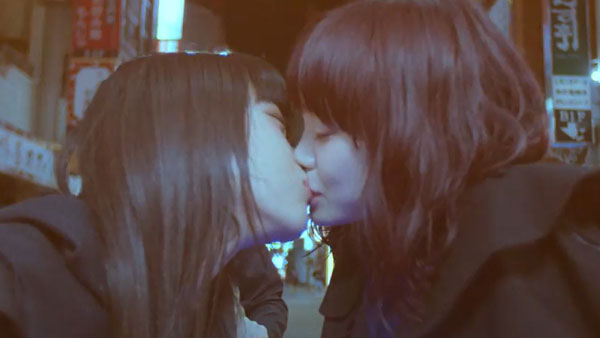 I had you at the thumbnail, so there’s no need to be clever here. Mwa ha ha. 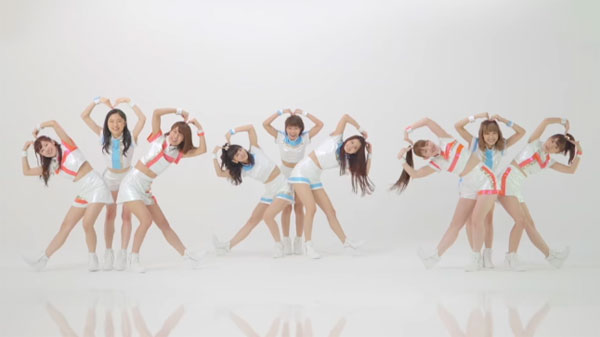 LinQ returns with another single for the year. This group has been pretty random in style in the past. Their last few releases finally introduced some consistency to their music, but once again they’ve gone in yet another direction. With a hint of electronic in their pop sound and a smothering of CGI in their video, they deliver a technically impressive PV. Unfortunately, it’s is so grand in presentation that it hides the personality I’ve enjoyed from this group.

I think the first thing noticeable about this PV is how dreary it is in comparison to their past few offerings. Instead of large mansions and gorgeous outdoor pieces, we’re given pure white backgrounds and a green-screened ocean. The ocean shots do feature a shallow area of real water that the girls splash around as they dance. It’s a nice touch, but the rest of it looks absurdly fake. The scenes are given some life with an overwhelming use of CGI, but otherwise there’s not a lot going on for the setting.

So let’s talk about this CGI. It’s hard to miss. Pretty much every scene is ripe with computer generated streamers, shapes, fireworks, snowflakes, or all of the above. Pretty much every single scene change in the video is also treated to a transitional effect. The effects deserve praise for being layered, wonderfully vibrant, and gorgeous in every way. The execution is amazingly well done.

What kind of ruins it for me is the effects are not just in the video, they smother the video. A few of the more acrobatic moves and impressive dances are colored over with these computer effects. A lot of the solo scenes are almost completely covered with fluff as well. In its effort to be flashy in the technicals, they kinda covered up what makes the group so much fun to watch: the group itself.

The member interaction that makes their PVs so damn fun to watch is almost absent from this video. Additionally, the outfits are cute but forgettable amidst this action. They barely stand out against the white background. Most of the dance isn’t too flashy, but there’s a few scenes that are eye catching. The individual member shots are nicely done, when they’re not being overrun by an after-effects flurry.

Despite getting a little lost in itself, it still manages to be a decent PV to watch. Still, LinQ is a group that exudes personality in its PVs, and to see that element being downsized in favor of fluff is a major bummer.

The song itself is an enormous step down from the recent hits of “Supreme” and “Hare Hare Parade”. It does have a hint of their fun pop sound, but it’s so tame in comparison. The instrumentals are surprisingly flat and cheap sounding. I just can’t get overly engaged in them. Luckily the song is much stronger in the vocal department. LinQ has an awesome chorus sound, and it’s used just enough to give me satisfaction. It’s not an awful effort, but they’re definitely capable of much, much more than this.