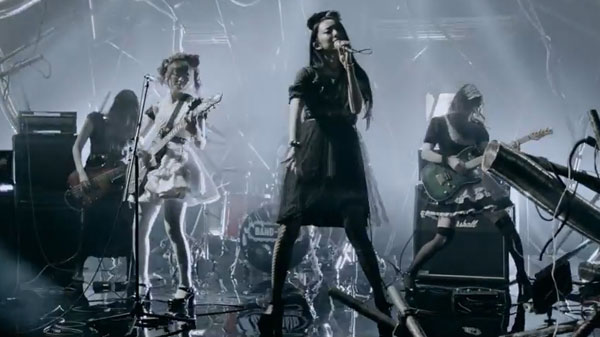 It’s an exciting time for BAND-MAID. Instead of a PV to promote an upcoming album track, they are releasing their first proper single in two years. It’s also being promoted as their major debut. Alongside a world tour with several dates in Europe set, this group seems to be taking off and I couldn’t be happier for them. The title “YOLO” did make me scratch my head a little, but worry not. It’s the same supreme quality release BAND-MAID has given us time and time again.

This PV goes for the dark and edgy look. We’ve seen this motif a time or three from BAND-MAID, but once again their execution is wonderfully on point. The outfits are a rehash of the same styles the girls usually wear, but look nice. Nice stockings for sure. Ahem. The PV spends a lot of time in the group shot as it should. Since they are a true band, the authenticity of their jam sessions adds an extra layer of awesome to every shot. It’s a lot of fun to watch. The group’s self-production on the song surely helps, too. Whatever the case may be, their energy is contagious and super fun.

There are a nice array of solo shots, too. These are equally fun because they continue on with the instrumental display. There’s no excessive showiness or out of place dance, just the girls doing their thing. This group knows who they are and what they do best. I’m so glad to see a female rock band and their producers have this insight. I guess you could say this PV is reminiscent of their past stuff, but is that a bad thing? In my opinion, hell no.

The PV doesn’t have much in the way of after-effects. The set is a simple stage with mangled pipes and wires surrounding it to deliver an edgy look. It’s good decoration in that it makes things less bland, but more importantly is completely out of the way. The PV makes excellent use of lighting.

Things are consistently well lit and easy to see. Strobe lighting is used amazingly well for scene transitions and the more energetic parts of the song. It really pushes the atmosphere for this PV over the top. Camera work and scene selection are also top notch. Even though some shots are quite brief, they still manage to be clear and memorable. The PV is exceptionally well edited.

This roundup is at risk of turning into a gush fest over BAND-MAID. It can’t be helped. When I watch this group, all I can say to myself is “This is it.” This is everything I want from an idol group, band, or musical artist period. Talent? Drowning in it. Awesome music? Consistently. Great videos? You bet. And last but not least, awesome girls? In every way. I really can’t make it any more clear how much I love this group and what they do. They’re authentic, energetic, incredibly well produced… They’re the whole package.

The song also meets my extremely high standards for this group. BAND-MAID has been transitioning into doing some self-produced stuff if I’m properly informed, and this release is reported as having lyrics from Kobota Miku with the other members handling the composition. I’m sure there’s some producers to doll things up, but to see them so involved in their music adds another exponent to how awesome they are.

I’ve always felt you can tell when artists are connected to their music, and it shows here. The instrumentals have a terrific rock feel with a slightly optimistic tone, and the vocals from Atsumi Saiki are super impressive as always. Miku’s backing vocals add a nice hook to some of the longer verses too. I think I’ll go listen to this a few more times. You do the same.