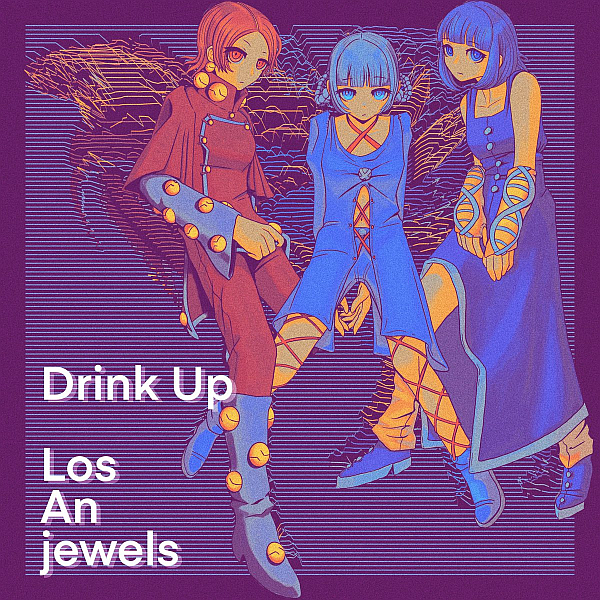 My thoughts on “Drink Up”, the third single from Los An Jewels.

I must admit, it has been pretty interesting to watch how the Idol industry has reacted to this whole COVID/lockdown situation over the past couple of months. Most groups have moved much of their activities online in some capacity, something that I think will probably have a lasting effect even after all of this is over. Some on the other hand are in the fortunate position where they can just close up shop and ride this whole thing out. Either way, the general consensus seems to have been to put a hold on releasing new music for now.

Well, unless you’re a group like Los An Jewels (and a few others too to be fair) who have decided to just carry on full steam ahead and release not one, not two but three new singles in successive weeks. They’re the latest tapestok records production in case you didn’t know and yeah, they’re very quickly establishing themselves and getting their name out there in the hopes of presumably capitalizing on their efforts once things return to some semblance of “normal”, whenever that might be.

Like I just mentioned, “Drink Up” is the group’s third single and at this point I’m not really sure what to expect. Their past two releases have been pretty all over the map when it comes to styles and influences but I’ve enjoyed them a great deal more than I expected to. Rap and its adjacent genres aren’t typically my thing but Los An Jewels are putting a pretty interesting spin on things by pulling in elements from a whole host of usually unrelated sources. While I’m not sure how these two tracks are going to play out, I’m sure it’s definitely going to be an interesting listen so let’s see what we’re working with here.

The single’s title track encourages us to “Drink Up” while providing a bass heavy instrumental full of wub wubs as the backing track for us to do so by. You think that things are going to really take off when the screaming, siren-like synths come in but it’s a fake out as the intensity vaporizes and we’re left with a fairly light synthesizer instrumental that is accompanying very bright and moderately vocoded vocals. It’s very pleasant to listen to but you can’t help but to notice that there’s a building up of energy in the instrumental which eventually overflows when we reach the song’s first chorus. Here we’re treated to what can best be described as mix of both styles that featured previously and it’s a very appealing blend I must say. The vocal performance is also very good, with the perhaps more expected Rap flows making an appearance here and providing some nice hooks as well. I’m a big fan of the melodic harmonies that accompany it as well by the way. Still fairly chilled out for the most part but the harder synth parts gave things a bit more depth in my opinion, which I think the song probably needed honestly. That’s pretty much the formula for this fairly short 2 and a half minute offering, it’s not something that you would say is highly complex but it doesn’t have to be that when everything is well executed and it results in an enjoyable listening experience.

B-side “Hey” continues with the chilled out vibes but leans a lot heavier into it than we heard on the single’s title track. A very bright and colorful synthesizer melody is the standout feature of the track’s opening instrumental and it sticks around for much of the duration so hopefully you like it. Hazy, almost a tad melancholic sounding vocals are introduced fairly quickly with a mild touch of vocoding since I guess that’s the style we’re trying to establish for the group. They sort of hit this sweet spot between sounding floaty while still having each syllable pack a bit of punch. Not the most obviously energetic delivery you’ll ever here but there’s energy in there and it’s appropriate for the tone of the track I think. I’m not super in love with what they do with the chorus though honestly; turning up the vocoder so the vocals become almost too robotic, along with introducing some fairly harsh distortion on the synthesizers kinda kills the vibe we had going ya know? It makes it stand out for sure but it sorta took me out of it a bit. Outside of that though I thought the instrumentation was pretty well structured and had some interesting layers to it and the vocal performance was strong and once again had some nice hooks despite being a little bit overshadowed by the instrumental’s rather large personality. Your enjoyment of this track is probably going to hinge on that one melody though.

On the whole I would say that “Drink Up” sits right in the middle of my mental ranking of the current Los An Jewels releases. That’s not saying much of course, given that there’s only 3 right now, but while I didn’t quite enjoy what I heard here as much as “Springs” (review here) I definitely think it’s a lot more palatable than their “Tonight” release (review here). No matter my opinion though, they’re definitely doing some pretty interesting stuff.

I still kinda find it hard to believe that a “Rap group” (which is a very broad and unfair characterization I know) is capturing so much of my interest but I’m going to keep going along with it for as long as Los An Jewels keep putting out compelling takes on the genre. Not sure when the next installment is going to be when it comes to that, but I’ll be looking forward to listening to whatever it is when the time comes.