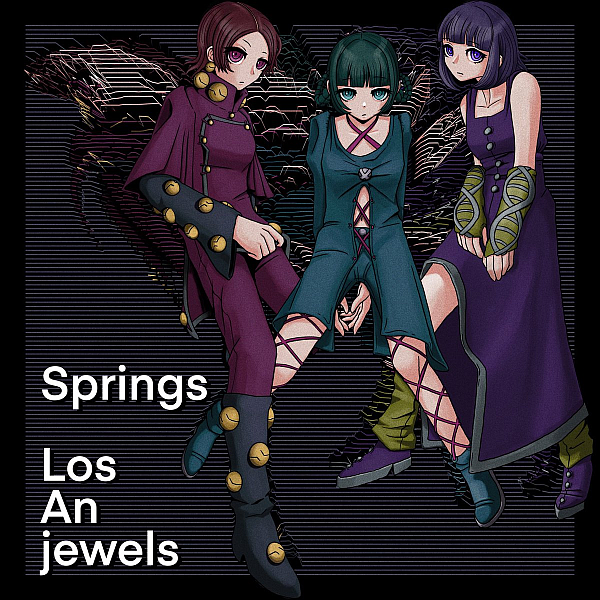 My thoughts on “Springs”, the first single from Los An Jewels.

While granted there are significantly less options currently due to the recent lockdown situation, it’s pretty easy to pass by a group in the normal sea of new releases. This is especially true if it’s a group you’ve never heard of before or are totally unfamiliar with. That’s why it’s so essential for a group to have some sort of gimmick, angle or what have you to stand out from the crowd. Failing that, if you’ve got a quirky name that’ll also do the job. Well, at least as far as I’m concerned.

Los An Jewels have a pretty quirky name, well at least I got a chuckle out of it when they showed up in my social media feed. They’re a 3 member “Japanese hyper Pop Rap girls unit”, their words not mine, who have been around for 8 months or so. They’re produced by the folks over at tapestok records, who are probably most well know by people in this fandom for producing the many iterations of Koutei Camera Girl. Can’t say I’ve seen much excitement for this new unit yet but maybe they’ll pick up a few foreign Koutei fans, we’ll have to see how good the music is first I guess.

Speaking of which, “Springs” is the debut single from Los An Jewels and it comprises of two tracks so it should be a pretty decent first impression of what they’re going for with this project I hope. As some of you know, I’m not super into Rap music generally and Idol groups that focus on it aren’t something I’ll ever claim to pay too close attention to. That said, there was just something about this that caught my attention and I figured why not give it a listen and write down my thoughts. Never let it be said that I’m not willing to try new and different things. Whether this pays off or not remains to be seen though, so let’s take a listen and find out.

The single’s title track “Springs” leads things off and not in the way that I was expecting it to if I’m being totally honest. Clean guitar passed through a chorus pedal with a pretty mellow beat accompanying it is pretty far removed from the sort of atmosphere I thought this group would be going for but it’s super enjoyable so no complaints obviously. A fuzzier guitar component is brought in along with the vocals, which helps to give the song a bit more body and we’re now venturing very close to Dream Pop/Shoegaze territory. The light, vocoded vocals are adding to that too and I actually don’t mind the chill sort of Hip-Hop style delivery either. The lyrics are fairly catchy which is always a good thing for this style, though there are a couple of times where they maybe put a bit too much vocoding on them and things start to sound a bit too robotic and wobbly. This happens very occasionally though so it’s really not that big of a deal. I do however feel like the chorus could have possibly stood out a little bit more than it did but that’s just a personal preference as honestly it’s catchy, has a nice chill vibe and fits with the rest of the song really well anyway. I’m actually very pleasantly surprised by this track, not what I expected at all but in the best way possible.

B-side “Monotone” has a rather unfair title in my view, as the ambient synthesizer tones and mild background static that open the song are fairly interesting to me at least. Things get more vibrant still with the introduction of some Electronica inspired synthesizers and another fairly chill beat to set the pace. The first verse comes in around the same time and it’s performed in a fairly similar style to the single’s a-side, vocoder and all, though perhaps with a bit more energy for this particular outing and to better match the flashier instrumental involved here. Really liking the lyrical flow once again here too, still very chill and relaxing and I didn’t notice any rough spots in the vocoding which is good. There’s also a pretty cool “freestyle” sort of Rap part in the middle of the song, which obviously isn’t a real freestyle but you get what I’m trying to say I hope. Outside of that the lyrical content is fairly repetitive I guess but that’s sort of the vibe you go for with this style of music so no hate from me, they made it sound really enjoyable and I never found myself getting bored is more than I can say for some groups that try to be a lot more complex. A little bit more along the lines of what I expected musically, but still way more my thing than I would have ever thought possible.

Like you might have guessed, “Springs” and I guess Los An Jewels as a whole have very pleasantly surprised me. I was expecting some kind of by the numbers, stereotypical “We’re Japanese girls who rap” kind of thing and that’s very much not what this single is. If you’re a fan of Dream Pop, Chill-Hop…Shoegaze even then there’s a lot elements from all of those genres included here and this single could be of interest to you if you’re open to checking out something new.

So yeah, I’ll definitely be taking a listen to the next new things that Los An Jewels put out. Which will be pretty soon here considering they’ve already got 2 more singles in the can by the time you’re all reading this. I guess it just goes to show that you never know when a new group is going to come along and surprise you, which for me is one of the best things about this hobby honestly.