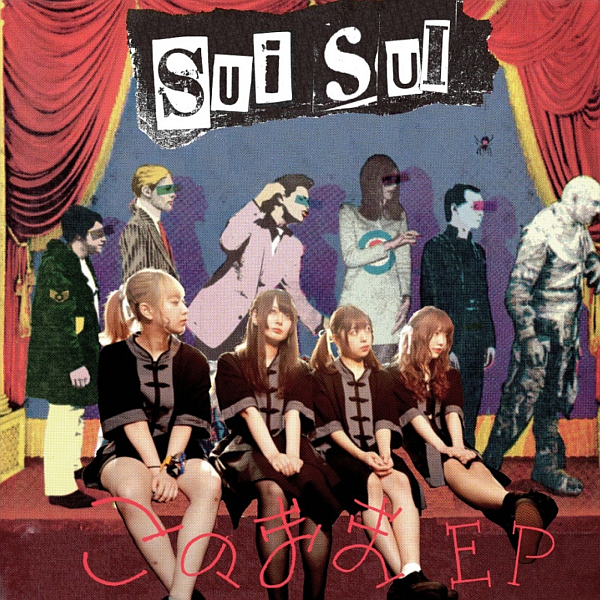 My thoughts on “Kono mama”, the second single from sui sui.

It’s probably hard to appreciate given that we live in the glorious age of the internet where everything is available instantly at our fingertips, but the Japanese Idol scene doesn’t just revolve around what the groups in Tokyo are doing all of the time. There are many groups who are only really active in say Nagoya, Hiroshima, Fukuoka, etc and might only head through to Tokyo once a month or so for a weekend. It’s an interesting dynamic that you don’t really get to experience unless it’s in person but thankfully the internet allows many of us to follow these groups without the inconvenience of a several hour train ride to see them.

Take sui sui for example. They’re a 4 member group who are based out of Osaka and do most of their shows either there or in the Kobe area. They’ve been active for about a year and a half and are one of the bigger names in the Osaka scene. For context they typically end up playing shows with the likes of Melon Batake a go go when they’re in town. They just don’t get as much exposure due to being in Osaka and not really having released too much material publicly until now.

“Kono mama” is the group’s second single and comes almost a year after their first, the self-titled “sui sui” which I didn’t review at the time because apparently my policy of reviewing everything still has some holes in it. My understanding is the group’s music features a Rock/Punk sort of style and both those things are up my alley so I’m hoping for a couple of entertaining tracks here. I’m not super familiar with the group or their songs but I’ve heard a couple over the past year or so from memory they’re pretty solid. Let’s see if they’re as good or better in a studio setting, shall we?

Title track “Kono mama” sets off on a very bright and energetic note, with a rather catchy Pop Punk style instrumental providing what I would assume is going to be many peoples’ first impression of the group’s music. Pretty straightforward stuff but it’s Pop Punk folks and you don’t really need to over-complicate things when it comes to this particular genre most of the time. The vocals that come in for the song’s first verse aren’t perhaps as energetic as you’d expect them to be but I really like the tone and the way that they flow with the instrumental. It’s a bit more lowkey by comparison sure, but there’s quite a few subtle hooks that play well with the steady rhythm being provided by the guitars and drums. There’s a kinda weird transition into the chorus which felt a bit jarring but said chorus definitely provides a shot in the arm when it comes to vocal energy so that was nice to hear at least. I kinda feel like the hooks maybe weren’t as strong or maybe the slightly muddy instrumental hindered them a little but still an enjoyable enough listen for most I would imagine. Outside of some minor production issues here and there, this is a really well put together track with some great vocal performances from the members and I would certainly recommend you to check it out if you’re into Idol Rock, Pop Punk or any similar genres.

If the single’s a-side maybe wasn’t quite Punk enough for you then b-side “Ai hei naka” might be something more along the lines of what you’re looking for. After teasing us a little with a sustained, galloping drumbeat to open the track it turns into quite the intense and very rowdy affair. Distorted guitar shredding and rapid-fire drumbeats accompany shouting and all manner of background chatter before things settle in a little and take on a slightly more melodic tone. There’s still quite a bit of attitude and venom laced into the lyrics as they’re at times almost sneered into your ears and the instrumental hardly misses a beat, maintaining its incredibly high tempo and intensity throughout all of this. They could have maybe toned it down a bit for the much more melodic vocal performance in the chorus, because it does sort of end up feeling more like a battle between the two components than one complimenting the other. Great vocal performance with some awesome high ranging notes and ear pleasing melodies that are almost being drowned out by the chaos of the instrumental going on around them. It’s a small complaint for what otherwise is a really enjoyable song though, with yet another very well put together instrumental, and vocal work that packs even more punch while still holding onto plenty of hooks at the same time. Great stuff.

I think as a first impression to many people, “Kono mama” should definitely get people talking about sui sui. I think I personally enjoyed the b-side a bit more than the title track but despite some minor flaws I personally saw, each track certainly has its upsides and I think will appeal to a variety of different people. If you enjoy Punk or Rock when performed through the medium of Idol then you should check this one out though, that’s for sure.

Hopefully sui sui will be able to release some more material in the not too distant future here as they continue to build themselves up as a group. There’s definitely a market for this style and the only thing I can really see holding them back a bit right now is their geographical location (and well, this whole pandemic thing too I guess). One to watch over the next year or so as I can see them really going places if they can get some momentum behind them.

Enjoy the content? Consider supporting the site on Patreon for as little as $1 a month.
S.U.I SOUND WORKSsingle reviewsui sui
0 comment
FacebookTwitterTumblrRedditEmail