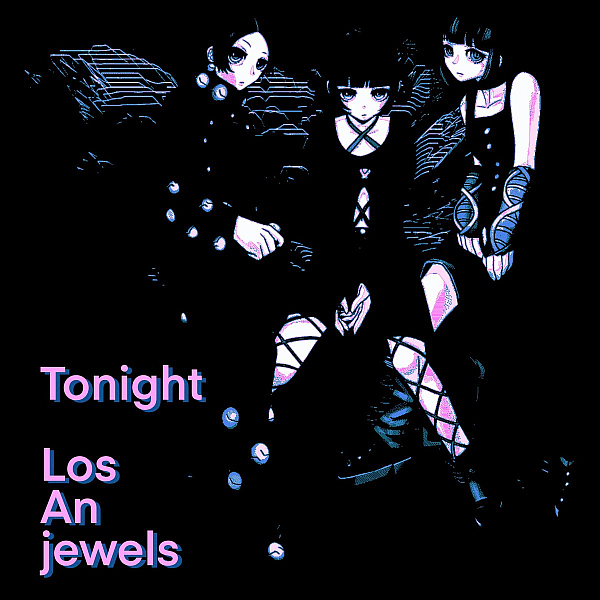 My thoughts on “Tonight”, the second single from Los An Jewels.

I like to think that I’m fairly open-minded when it comes to music, I’ll certainly try anything once for the most part at least. Of course I have my preferred genres like anyone else and there’s nothing wrong with that. I also have genres that I’m less keen on but can appreciate the artistic effort of, like Rap for example. Not something I’m super into generally but I can get into some Chill-Hop and what have you on occasion. As such, Rap Idol groups aren’t something I tend to be too interested in…until now I guess.

tapestok record’s latest project, the quite cleverly named Los An Jewels, appear to be hitting the ground running. Having released their first single “Springs” (review here) and then following it up in short order with the release I’m going to be talking about here today. They should also have a third single out by the time you guys are reading this, so who says the small matter of a global pandemic has to slow you or your ambitions down. Not this group clearly.

The group’s debut single both surprised and impressed me, something that’s fairly hard to do these days given my tenure as a fan of Japanese music. I rather liked the mix of Chill-Hop, Electronica and vocoding on the two songs featured and was left eager to hear more from this group. Turns out I didn’t have to wait long at all either, as along came their second single immediately the first. “Tonight” has 2 new tracks for me to get my teeth into and I’m pretty impatient to see if they’re going to leave as positive an impression on me, so let’s get this review started so I can find out.

The single’s title track “Tonight” is fairly short in length, clocking in at just a tad over 2 and a half minutes. Given the content though, that might be a good thing. This is a pretty intense one folks, with some really high tempo, pounding beats being the main driving force behind the instrumental. It’s pretty full on so you should probably prepare yourself if you’re not used to listening to something this up-front and demanding. Now there is a slightly more melodic synthesizer element involved too, but it’s more on the ambient side of things than being a clearly defined melody. It does soothe things a little bit though which I’m sure a lot of people will appreciate. I find it a little difficult to comment too much on the vocals, because honestly they’re so vocoded and post-processed that a lot of the time it’s really hard to make out what is being sung. That being said, the style does add the bulk of the melody to the track so it’s playing its role albeit a somewhat unconventional one. I could have done with a few more moment of cleaner singing personally but once you get past the lack of it, this is a pretty enjoyable song. Not something I would want Los An Jewels to make a habit of, but it does provide yet more variety to their sound that’s for sure.

B-side “Dali” comes in sounding like it’s about to be the most fire new Mumble Rap track of 2020, with that kind of percussion-y, flute-y instrumental that is really hard to put into words but you’d definitely know what I mean if you heard it. It’s pretty repetitive so if it doesn’t grab you within the first 30 seconds or so then you’re probably not going to be having too great of a time with this one. I’m not really a huge fan myself, it’s a little harsh sounding to my ears personally but the beat is fairly enjoyable even if the melodic component is a bit more of a struggle for me to get into. Vocally this song is more of what I was expecting Los An Jewels to sound like when I first heard of them. That sort of low and slow Rap flow (hey, maybe I’m a rapper too) with some pretty straight forward and repetitive lyrics. They add a bit of vocoder in there too occasionally to break things up a little which is definitely appreciated even if they are fairly few and far between. I get that not every song needs to be as intense or hyper-active as some of the group’s other material but it’s hard not to compare this song to those other songs and, at least in my personal opinion, have it come off just a tad bit boring as a result.

Well, one thing is for sure and that’s that Los An Jewels aren’t afraid to experiment with what they want their sound to be. I don’t think any of their songs sound all that similar so far which makes for some great variety and more chances that something will connect with new fans. Can’t say I’m a huge fan of “Dali” but I enjoyed “Tonight” quite a bit so I guess that’s a pretty good illustration of my theory in action.

I’m still pretty high on Los An Jewels as a new group, even if this single maybe wasn’t as strong as their first release. The fact I’m even enjoying them as much as I am is a pleasant surprise and I look forward to hearing what else they’ve got coming up here. Look for my thoughts on their third single on the site real soon here. It should definitely be an interesting one if the last two are anything to go by!