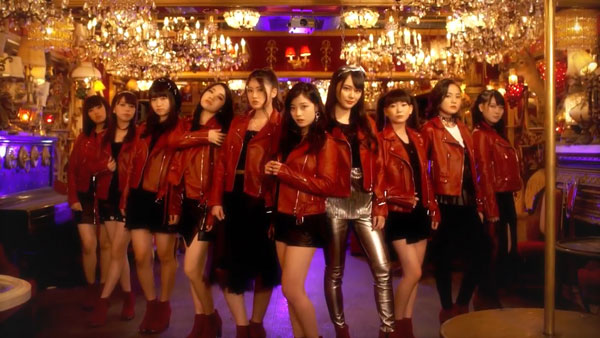 Rev from DVL is just a bit late with their Halloween release for the year, huh? In any case, the vehicle for Hashimoto Kanna dishes out something pretty memorable to wrap up their pretty empty 2016 release calendar.

For better or worse, this PV doesn’t really live up to its name. There’s really no vampire or other spooky Halloween elements in play. Instead, this is pretty much entirely a choreography-based PV. Most of it is comprised of the dance shot, and it’s a pretty good one. The choreography is pretty good quality, and the room it’s filmed in results in some pretty tight quarters for this 10-member group. The timing and execution on their part is very good. The synchronous elements are pretty uniform, and there’s even a few shots where the members dish out some moves that result in some interesting formations. It’s all very well done and fun to watch.

In terms of setting and clothing, I guess it’s a bit Halloween-esque, but not specifically so. Chandeliers seem to be a big part of this PV’s decor. You’ll find them in pretty much every room the PV is shot in. The dance shot has a few, along with very intricate Victorian styled walls, furniture, and wall lighting fixtures. The solo and sub-group shots are filmed in a similarly decorated restaurant or bar location. The outfits for this one are pretty nice, too. Every member gets a blood-red jacket, so maybe that’s the Vampire tie in. Underneath them is a black one piece outfit with designs varying slightly for each member. Most of them are pretty generous in the leg department, but nothing too wild. Hairstyles are also pretty detailed in this video. Overall everyone and everything looks great.

It’s a nice PV overall. It may be missing some of the more typical idol elements, but good choreography and execution make for an interesting watch. It may have been nice to see a little more variety in the member shots, but at three and a half minutes the PV manages to not outstay its welcome. This makes the flaws much less noticeable. The production behind it is good. Camera work is a bit typical with generic panning being the most exciting thing that happens, but scene selection is pretty good so it works out. There are some occasional bits of CGI that look pretty cheap. Mostly they just impose random words on the screen with a broken glass effect, but it’s rarely seen so it’s not a big deal. For the most part, the PV sticks to the strong dancing.

The song itself is pretty unique for this group, or idol music in general. Essentially, it’s a deeper sounding pop tune that reminds me of something the once popular Russion duo t.A.T.u. might have put out during their peak. The instrumentals are synthesizer heavy and a little darker in nature than your typical idol dance tune. It sounds pretty good. The vocals for this one are also memorable. The deeper instrumentals force them into a different element and for the most part the girls deliver. The chorus lines sound very nice, and the solo lines are pretty good. Hashimoto Kanna gets a majority of the vocal time obviously. While her voice isn’t made for the lower octave, she does a pretty good job of adding a little sultriness to her voice for this song. Overall, I dig this release. It’s unique and nicely delivered.