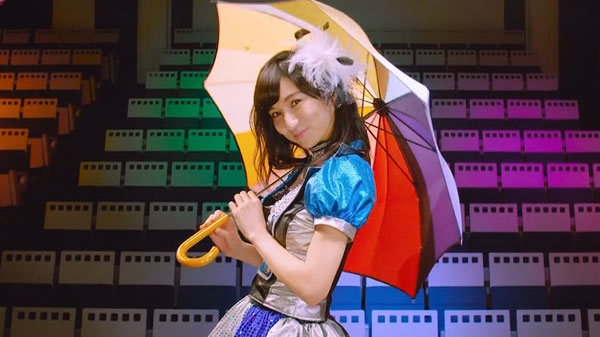 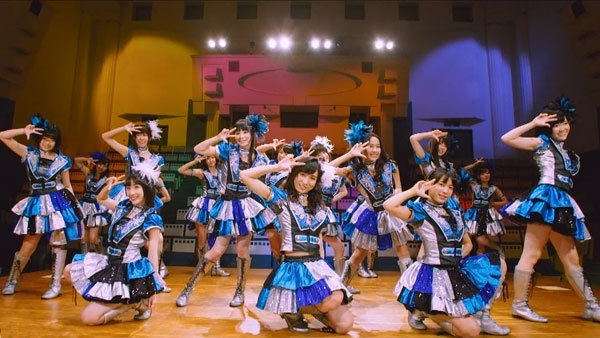 Idol College will always have a special place in my heart as that idol group I met by accident in Ebisu during my first Japan trip. Since then, I’d say I’ve become a moderate fan of them. They don’t always blow me away but they’re a nice group with some decent tunes. My bias for Minami Chisato is also pretty obvious. Maybe her centering this release is clouding my judgment, but I think this is the coolest release the group has had to date.

Visually, this PV is very well done. The backdrop for most of the PV is an empty auditorium, which is pretty amusing as they’ve used such a backdrop in past videos. I had thought I reviewed it here, but I guess that was done in The Evening Show days. Props to anyone who remembers that. Getting back to visuals, what makes this otherwise lifeless backdrop very nice to look at is the use of colored lighting. The seats and wall are lit up with lights that blend into each other with a rainbow-like appearance. The stage itself is well lit with simple white lighting and the dance shot action is very easy to see. It’s cool to have this mix of artsy lighting, but the group itself given a full chance to shine. Pun so intended.

Adding to the color scheme is the use of colored umbrellas in many solo shots. The colorful backdrop really makes them stand out. Some solo shots are filmed on an empty sidewalk or concrete stairs, so they add quite a bit of life to these clips as well. That’s really the only decor there is to speak of, but it looks really nice. The outfits don’t really follow the array of colors theme, but are very striking with their bright blue fabric and detailed silver and black highlights. The designs on them are very nice looking and above average overall. 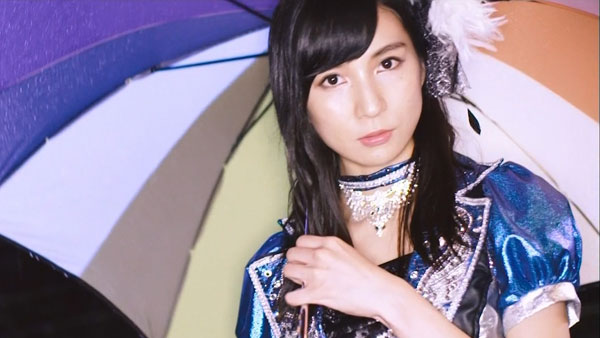 The PV also benefits from a lively dance shot. The choreography isn’t the most synchronously done, but it’s still intricate and fairly impressive. The large group is divided into a few rows, and often each will do their own thing. It makes for some interesting formations and avoids the monotonous approach many idol PV’s can take. It may not be an E-girls tier affair (we’ll have a look at that later), but this PV features less waving and more actual dancing. It’s really fun to watch. There’s also a dance break toward the end that has a few cheesy transitions, but also features some complex moves than I didn’t expect. Very nicely done.

The PV is very well assembled. The camera work is good. Not too stagnant, not too free flowing. Scenes are long enough to get a good look at what’s going on. There’s a satisfactory amount of solo shots for the members, and the extra focus on Chisato works out great for me. All in all, this is by far the strongest PV I’ve seen from this group. Bias or not.

I also feel very positive about this song. It continues on with the techno sound they’ve featured in the past, but this one has a lot more punch to it. Portions of the arrangement feel very similar to late 90’s, early 2000’s Avex groups like move or TRF with a higher tempo. The production value behind them feels much higher than their past releases and sounds great.

The vocals are nicely done. Very idol-ish without feeling weak or annoying. This group has a few good vocalists in it and they get a small line or two to show it off, but mostly they stick with a very pleasant chorus sound. Chisato gets a few chances to talk or yell at us, which is also biasedly welcome. All in all, Idol College hit this one out of the park. Beautifully done on both sides of the release.