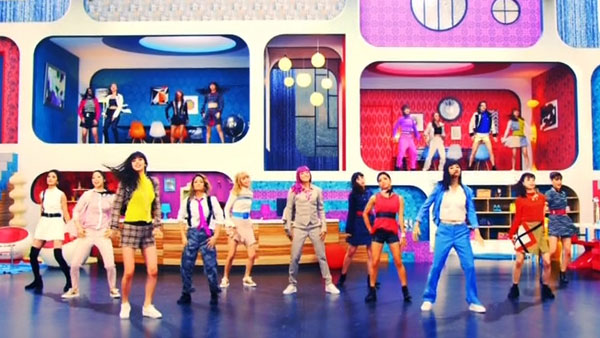 I’m really excited to include E-girls in PV Roundup for the first time. Yeah, they’re not quite idols, but this is a group that’s a pretty big deal for me. The members of this group are comprised of the separate groups Flower, Happiness, Dream, and a few exclusive members. Dream has been around in some incarnation for over 16 years, and is the first Japanese girl group I became interested in. To see the brand still active after all these years is pretty badass. Not many make it that far. Regardless, I love this group. They’re a very high quality production and dish out some pretty memorable songs. This one doesn’t really break any new ground for them, but it’s still damn good.

The first obvious thing about E-girls is the intricacy they put into pretty much everything. You’ll be hard pressed to find a better dressed group in most of their PV’s. Sometimes they’ll do the uniform thing, but most of their recent PV’s feature them in super fashionable, brightly colored, dance friendly clothes. Despite the abundant amount of girls on screen, no one’s wearing the same thing. Everyone looks fantastic as usual. The video even turns into a full modeling show for a time. There’s a dance break that transitions to a runway with clothing you’d expect to see at such a show, but never on the street. In any case, the clothing is all pretty legit. It looks a bit high dollar for my taste, but as long as I don’t have to buy it I’m fine with it.

The brightness doesn’t stop there. E-girls PV’s tend to be very unlike most videos in J-Pop. Rather than dulling colors down with the dreaded Japan filter, E-girls embraces and enhances them to an almost K-Pop degree. The settings range from an open lobby area, to dressing rooms, to various corridors connecting them all together. The walls, desks, and everything in between are all very bright, and the anti-Japan-filter makes things borderline glow. However, it’s post-processed very well and nothing looks like it’s radioactive. Combined with the members and their epic wares, everything in this PV is pretty damn beautiful.

You might miss some of this gorgeous backdrop as you try to keep up with the choreography, though. There’s never a boring moment in an E-girls PV and this one’s no exception. It’s worth noting this group is produced by EXILE HIRO, so their choreography is created by some of the best in the business. The dancing here is legit stuff. You won’t see any arm waving or generic moves here. After nearly five years of practice, these girls are amazing to watch. Simply put, I’ve never seen a better group of dancers. In my opinion, not even the perfectionists of Korea can match what these girls do.

The choreography is also ever present in the interaction and individual shots. Nothing just happens in an E-girls PV. It’s all timed, synced, and leading up to something. It’s so fun to watch. The difficulty of moves and practically perfect sync they have is unheard of. I can’t even imagine how epic they must be live. This PV’s choreography is a little status quo for them, but with the bar so high it’s nothing to complain about.

That’d be my only slight concern about the PV. The quality is their usual damn near perfect, but it doesn’t push the bar up any. Still, it’s a fantastic watch. The visuals are stunning from start to end, the dancing is wonderful, and the technicals behind the PV are also great. Scene selection and camera work does everyone justice. Scene transitions and splices are done in a very subtle way and feel very fluid. They may play it a little safe in this one, but their “safe” is better than most groups’ best effort.

The song itself is a little less energetic than their usual, but it is an album song so I guess we can’t expect the big guns out for it. Don’t get me wrong, it’s not bad in any way. The instrumentals are a very fun mix of dance oriented pop music with a nice layer of techno elements to keep things interesting. The vocals are also pretty awesome. It’s pretty incredible how these girls from various groups come together and harmonize so well. EXILE magic at work, I guess. In any case, it’s another awesome release from a group I love very much. I hope someone reads this, gives them a chance, and falls for them. I know it’s a bit out of our usual idol realm, but I have very strong, positive feelings about this group.