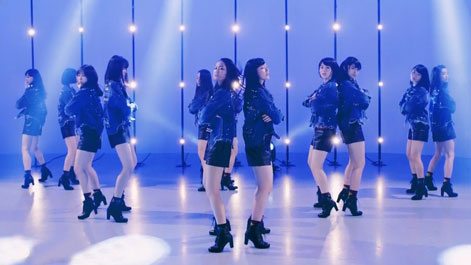 The elegant idol group X21 is back for another round this year. My interest in this group may be pretty casual, but I’m always curious to see what they might offer next. They’ve had some fun releases. Unfortunately, while the song is acceptable, the PV for this one is just a little too flat.

As far as atmosphere goes, we’re in very familiar territory for X21. There’s a pretty generous use of the treacherous Japan filter in play, but it doesn’t look too bad overall. It neither hurts nor helps the kinda drab setting we have in this studio for the dance shot and select solo shots. It also doesn’t make much difference for the generic, unmemorable outdoor shots filmed under a bridge. This PV offers no significant eye candy in the way of setting.

As far as personality, it’s pretty lacking there too. The dancing is okay, but this choreography seems very light in comparison to their previous offerings. There’s a few cool moves here and there, but most of it seems like they’re just going through the motions. It’s even worse in the solo shots which by and large just have the girls staring blankly into space. There are a few clips where the girls appear to argue, but it’s without context and comes off as out of place. This is occasionally interrupted by a few girls in the outdoor shots running or staring dramatically, but there’s not much excitement there, either.

Not all hope is lost. The PV does offer some eye candy with the outfits. They actually look pretty great even if there is a lack of variety. All of the members are wearing the same kind of denim jacket that features numerous patches and stylistic tearing, a striped shirt that has a separated collar held on by a ring in front, and leather-like shorts that are pretty fan service friendly by X21’s ladylike standards. The PV also has good production value in the camera work and scene selection. The lack of action is an issue, but everything is presented quite nicely. It technically has the makings of a decent PV, but the lackluster everything else drown this good point out.

Song-wise is a slightly better story. I do think it’s a bit less memorable than some of their past tunes, but it’s a nice listen. The instrumentals stick to their lighter pop routine, and the vocals sound like X21 usually does. Pretty much all of the song is presented in full chorus, and I personally think this is a strength for this group. As a group they sound quite powerful. I wish they could have gotten stronger material for this release. They are capable of more than this.