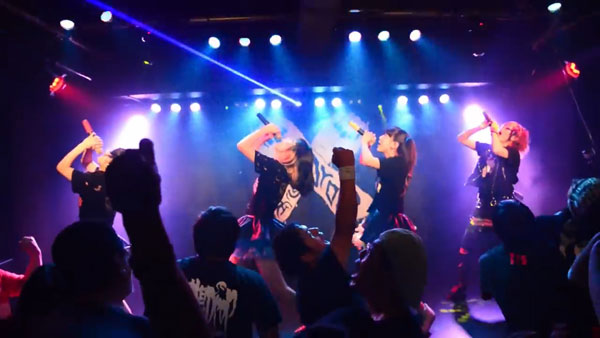 Guso Drop has been a key player in my expansion into alternative idol groups. I used to be a little scared of idol groups that had a more “hardcore” production, but I’ve since opened up to this world and discovered a lot of fantastic music and groups. Guso Drop will soon be losing their “leader” Saki and gaining three new faces, so this will be the last single with the original guard. This PV focuses on what has made the group great and is a fantastic way for the original act to wrap it up.

There’s not a lot to the PV, really. Instead of choreographed shots or dark imagery like we’ve seen before, this PV is basically a well shot live clip. Everyone is in on the fact that this is going to be a PV because the camera work and action are way too good for it to be a spliced together, lazy live compilation. This PV really captures the wildness that can happen at their live shows. I’ve seen some of their live clips online and this PV is pretty accurate if not slightly more organized for production’s sake. As much as I’d love to see them, I wonder if I’d walk out in one piece. Then again, it’d be too amazing a show to care.

The authenticity of this PV really is amazing. These girls are totally wild on stage. The members manage to be chaotic but choreographed in a way I’ve never really seen an idol group do. Their fans are the craziest I’ve ever seen. The calls and wotagei for Guso Drop are downright dangerous. Just when you think you’ve seen it all, you see the girls picked up by them and down in the pit with them. It really is one of the most intimate performances you’ll ever see an idol group do. It’s such an amazing spectacle and this PV presents it gorgeously.

In the end this PV is just flat out badass. The presentation captures everything awesome about them in a nutshell. On top of that, it does it in amazing quality. Everything is lit well enough that the action is clear, but it remains natural enough that it feels like a typical live show as you watch it. The camera work is unbelievably good for it being filmed in such a small venue, too. Scene transitions can be chaotic at times, but overall it feels very complete and it’s easy to focus in on the action on screen. Very rarely does a PV sum up a group so well. This is a PV that will never get old, and to say that about a live shot themed video is exceedingly rare.

The song? It’s the usual Guso Drop awesomeness. I listen to them pretty often. From straight out jam sessions to background music as I play Elite Dangerous, I have thoroughly enjoyed their music for a while now and this is no exception. The instrumentals are hard rock music in its purist form, and the vocals have a lot of idol quirks to them yet perfectly maintain the rock image. I also really dig the wota calls integrated into the song. It adds to the atmosphere of the video and brings the authenticity up to 100%. Super solid track here. Change is coming to this group, but I hope this terrific energy and great music they’ve had will continue on.