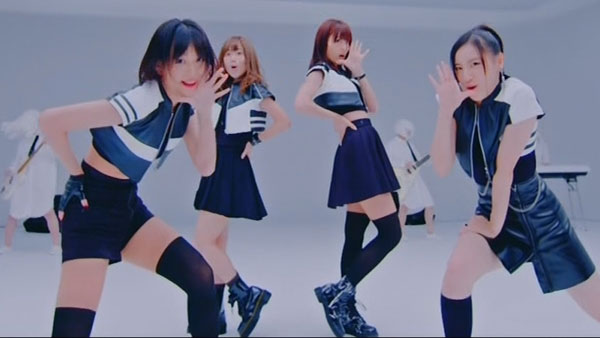 The last time I wrote about a PassCode PV, I made the comment that you never know what they’re going to go next. This is absolutely still true. The rock theme is in play as always, but this release seems to be infused with some 8-bit retro goodness. It’s an interesting mix that you might raise an eyebrow to, but the execution is beautiful in both video and audio. A moderate amount of aftereffects in the video contain pixellated text and similarly formatted shapes.

There’s also a side scrolling video game rendering of the girls making their way through an NES-like world. While we don’t see too much of these scenes, the work that appears to have gone into them is noticeably high. Maybe they just yanked and/or recolored assets from an existing property, but it looks very good. The random overlays are also presented with a fantastic quality. Text pops on the screen and other color swaps and transitions are stylish and intricate.

When we’re not being wowed by retro effects, we get to watch the girls perform a pretty energetic dance and performance shot. More expressive than intricate, you can expect a lot of rocker moves in here. The girls regularly dig deep to belt out the bigger notes, but they do go into a dance number a few times too. All in all, it’s fun to watch. It’s definitely more memorable than their previous PV’s ninja quirks.

Additionally, there’s a helping of solo shots to keep things moving along. These usually consist of simple singing shots, but they’re mostly filmed within the dance shot so things never calm down for too long. There are a small amount of solo shots that are filmed elsewhere that look nice, but mostly we’re right in the middle of the action. The most memorable scenes are Imada Yuna’s screaming parts. She’s pretty fantastic at it, visually and audibly.

The outfits are pretty cool, too. They’re monochrome and quite various in design from member to member. Minami Nao ends up being the most visually striking simply because it’s pretty showy. Everyone goes into fan service mode for some separate shots where the girls are wearing simple white long t-shirts. The other technicals of the PV have absolutely nothing wrong with them. The camera work does a good job of showcasing the action, the scene selection is pretty good, and everything about the PV is just so good looking and memorable. It’s not the most grand of productions, but it presents what it does have very well.

As for the song itself, oh man, top song of the year candidate much? The 8-bit and rock infusion in this one appeals to me like few songs do. The integration is absolutely seamless and wonderful. One thing I’ve enjoyed most about PassCode is how authentic their music sounds. It’s not flat or overly synthesized. It’s very rich in sound, beautifully balanced, and has just the right amount of idol-ness to it.

The vocals are also pretty awesome. While there’s vocoding in play which might turn some off, I think it’s well done. Yuna’s screaming adds in something a bit more authentic that might be missing otherwise. In a way, I guess the use of alterations is a bummer since they can actually sing pretty well, but it fits in perfectly with this song’s theme, and to me feels pretty seamless. I can’t get enough of the song, personally.