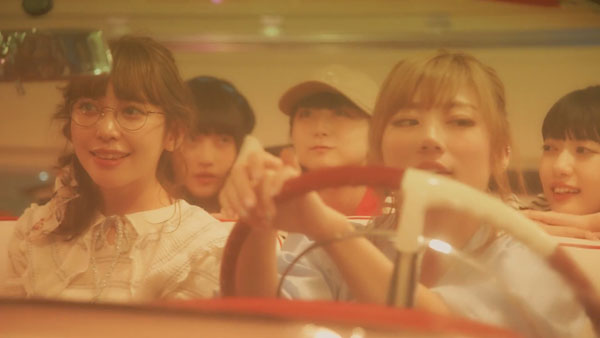 Musubizm’s debut PV was pretty impressive, so I was definitely curious to see what they’d do next. Well, as a second single should, this one takes their strengths from their debut and patches up some of the shortcomings, too.

Once again, it’s hard to watch this PV and not be absolutely smitten with everyone. You’d think we were watching a group of models. Oh wait, that’s exactly what we’re doing. Rather than idol costumes, this time the girls are wearing something a little more civilian. As expected of these industry girls the clothing is very fashionable, but it’s not over the top. Each outfit except for maybe one looks like something you might see a trendy girl on the street wear. Shiina Eru (the non-megane blonde) looks beyond perfect in this PV. Seriously, she might have one of the prettiest faces I have ever seen.

This PV doesn’t play up the plot as much as their previous one. It’s refreshing since their first attempt was just a little bland. Sure, we see the girls working at various food and clothing shops, but the settings are not relied on as heavily in this PV. Connecting the scenes together is a toy car that the girls push between scenes, eventually uniting them all when it magically becomes a real car. All of the shots are very well filmed with one exception. The attempt to pass off Eru as driving is hilariously bad. She’s not even close to the seat in the close ups, and the distant shots of the car clearly show an extra person in it. It’s unintentionally amusing. Anyway, these scenes are all fun enough to watch and the lack of a dance shot isn’t really noticeable, so it does the job well.

This is a PV that benefits from simplicity. The producers chose to portray one thing and do it well. They doubled down and it works out very well. I’m afraid that this still isn’t quite a five star effort, but it’s definitely an improvement over their debut so I’m definitely looking forward to what comes next.

The song however is a huge win in my opinion. It’s a pretty upbeat, mostly pop pop-rock song with a nice tempo and high quality but slightly repetitive instrumentals. The vocal quality is noticeably better from their previous A-side. Eru stands out once again, but the other girls have definitely improved a lot. The monotony they had before is totally gone. This group is coming together very nicely. I will definitely be picking this one up.