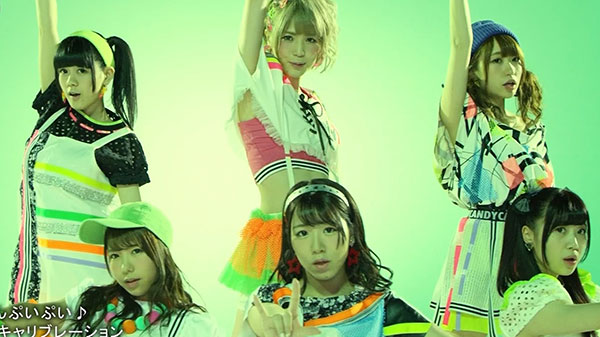 Moso Calibration is a group I only discovered last year via Tokyo Idol Festival footage. I found them to be a pretty cute “Dempagumi lite” group with cute members. After ten months of single silence, they’re back and it seems like they’re branching out from their dempa roots amd right into the club. EDM is an over-saturated genre in idol music right now, but props to this group for releasing something pretty good quality into the mix.

This PV takes no time in letting us know this group has done a genre swap. Gone are the frilly kimonos of yesteryear and in are the neon-colored dance outfits complete with functional robot arms. The outfits for this one are really nice. They feature a lot of bright color and fit the EDM theme really well. The robot arms are bit creepy at times but hey, A+ for originality. It’s kind of amusing to watch them hand confession letters, hold balloons, and do other girly things with them.

I can definitely say I’ve never really seen this before, and in a day and age where we’ve seen just about everything, that alone is an accomplishment. In any case, the members all look great. I had to go look at their profiles to figure out who was who. They’ve changed a lot since the last time I saw them. Futaba Nae in particular has went from a total babe to a super babe. Ahem.

Aside from a unique gimmick, this PV also has really, really nice production value. There’s a generous use of after-effects that fits the theme without looking too cheesy. I could do without some of the screen-covering transitions, but for the most part everything looks very nice. There’s a lot of rapid transition in many of the shots, but it’s all timed with the song’s rapid pace so it doesn’t seem as daunting as it might in, say, a general pop song.

It’s all about knowing your material and the producers did right on this one. The dance moves aren’t the most technically impressive, but again, they fit the song and atmosphere. Lots of jumping, pose striking, and raising the hands up in the air like they just don’t care are what we expect, and that’s what’s delivered. The quality of it all really is top notch.

All of this stuff doesn’t appeal as well without a good song, so it’s a good thing that we got a pretty damn great song. To me, most EDM sounds like the same thing over and over, but this one to me is unique. It has quite a bit more life in it than many EDM songs. It doesn’t solely rely on a monotonous beat, but instead takes some elements from pop music and even a hint of their previous dempa stuff to make an awesomely blended instrumental track that doesn’t get old after one or two listens.

At the same time, it maintains the tempo like a dance song needs to. The girls also bring forth their style of vocals into this song and manage to get out some pretty great notes, but also use their more silly side we’ve seen in their past offerings. There’s really a lot of genres coming out at once here and it works out pretty wonderfully.

Watch: YouTube (Official, Short Ver., Region Locked)
(Sorry, no other versions floating around. You know what to do.)