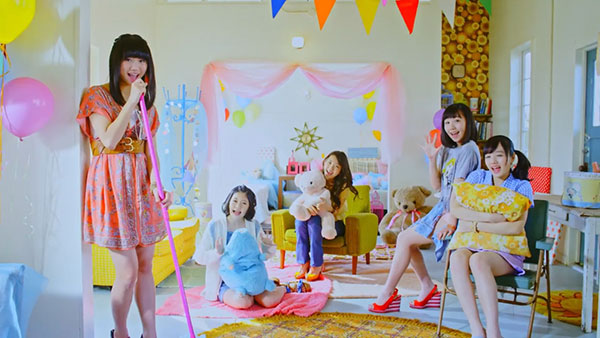 So Tsuri Bit is a bit of a controversial group. Despite the average age of the members of the group being quite low, they have not been shy on the fishing tactics, literal or metaphorical, and some of their attire is more or less gravure in a music video. It’s all in a gray area that I’d rather not debate on. I’ll leave that to more vocal people that have nothing better to do.

Instead, I prefer to think of this group as one that has some really catchy music and cool members. “Urokogumo to Orionza” was one of the catchier tunes of 2015, and this song follows the same formula with a really well done PV. However, I will also say this PV is pretty abundant on the gravure stuff, so if that’s a trigger for you, move on.

Right away we see this is gonna be a colorful PV. From the moment the girls grace us with their presence, we’re splashed with color. Everything really pops to a degree that’s slightly over the top. Nothing ever looks like it’s burning from over-saturation, but it’s just a notch away. While I do think I prefer this to dull colors, it is a tad distracting on the indoor shots. Outdoors it works a lot better. There’s not a lot else to this PV technically. A few overlays here and there, but no extensive use of aftereffects. It’s a simple and nice video technically.

As for the outfits, oh boy here we go. So there are three different costumes at play in this one. In many indoor shots, we’re treated to some civilian wear that is pretty stylish and very cute. Everyone is nicely dressed for a summer getaway, but the outfits are not too revealing with maybe the exception of Hasegawa Mizuki whose top could be a bit more, well, top-covering. Don’t worry though, as of three months ago we don’t have to worry about her.

Toward the end of the video, we see some really cute yellow on white dresses for all the members. They’re really cute but nothing extraordinary. And finally, yeah, on the beach we have the legendary disgusting bikini. I really don’t think they’re the worst thing ever. A little much? Maybe, but if nothing else it doesn’t transcend into super creeper level like something you’d see one of those “junior idols” in. All I’m gonna say is I think the girls all look nice and pull off the various outfits well.

This PV does have some dance to it that’s very reminiscent of their past stuff. It’s not super intricate but it’s fun to watch. A lot of the fun moments are created in the more frolic-y shots that Tsuri Bit always does so well. As I said, this is the fishing group and they fish very well. Smiles, peace signs, and kiss blowing are plentiful in these shots and they’re really cute. Probably the cutest scene would be the outdoor barbecue. The moe is real. The atmosphere is easily the best part of this PV.

As for the song, I think it’s on the lower end of great. I’m not sure why I felt the need to make that distinction, but yeah. It’s definitely in the same realm as “Urokogumo to Orionza”, although I think that song had better depth. This one is more reliant on energy, but at least it’s succeeding on what it’s leaning on. As I said, I tend to go to this group’s releases for fun pop music, and that’s exactly what this is. It’s not experimental in the least and the vocals are typical to maybe a slightly dull degree, but I got what I came for.