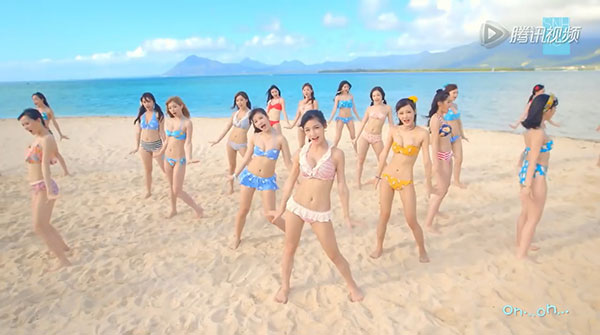 How about some bikinis we don’t have to walk on eggshells watching?

Oh hey, it’s our first dive into something not Japanese. Yeah, it’ll happen from time to time. I really wanted to review AOA’s “Good Luck” PV as well, but sadly didn’t get around to it. Tl;dr 5 stars go watch that shit.

SNH48 has been in the news a lot lately, and for pretty terrible reasons. I’m not going to go into that topic because it’s already been done. There was also some more recent news about SNH48 separating from AKS, but it turns out AKS is just working with a Chinese company to assist in managing their rapid expansion. Something like that, anyway. It’s hard to find reliable info for this group. Whatever.

SNH has a new original song and PV out and it’s a lot of fun. Good to see one 48 group can get a spring release right. Yeah, that is a total jab at AKB48’s “Tsubasa wa iranai”. Don’t even get me started on what a gigantic disappointment that was.

I don’t know a lot about China’s pop music scene. I’ve given it a try a few times and was never really into it. SNH48, however, I like. Admittedly, it’s for pretty superficial reasons. They’re all pretty hot, so a bikini PV is kind of a win here. Beyond my shallow fandom of this group, this PV still impresses. All of the shots are very gorgeous. Everything is very nature-oriented and we’re constantly exposed to some kind of great outdoors, wildlife-filled shot.

Things do get a little weird at times with some CGI animals floating in the sky, most notably a giant whale who decides he’d rather hang out with a few dozen babes in bikinis than swim around in his natural habitat and obey the laws of gravity. It’s out of place and a bit weird, but doesn’t take away from the fun and, well, bikinis.

The PV does feature some other outfits in the form of one piece dresses, often blue, yellow, or white in color. They look really nice. These girls are total babes which doesn’t hurt the visuals, but they’re really dressed well. The earthly colors fit in well with the nature motif. The bikini selection is really nice, too. None of them are excessively showy, but there’s plenty of, uh, jiggle to them as well.

As far as the production value of this PV, it’s quite high. The shots are kinda basic as far as camerawork goes, but the after-effects and CGI are actually very high quality. The PV also does not lend itself to any kind of bizarre color filtering which is a nice break from our Japanese counterparts. The use of all the nature stock-footage I’m 50/50 on. I would have rather it all stayed member-oriented, but at least they used really good footage.

As for the song, it’s nice. It has a very “world music” sound and would fit in well with something you might hear at something like Disney World’s Epcot World Showcase. The instrumentals feature natural sounding drums and wildlife noises to make for a really pleasant song. I don’t know if it’s a song I’d regularly listen to, but it definitely meshes with the video very well.

This PV really does have a little of everything. High productions values and the natural sights really do push this one over the top. I’m not talking about the fish.

Buy on CDJapan: Except you can’t, RIP my affiliate money. -G