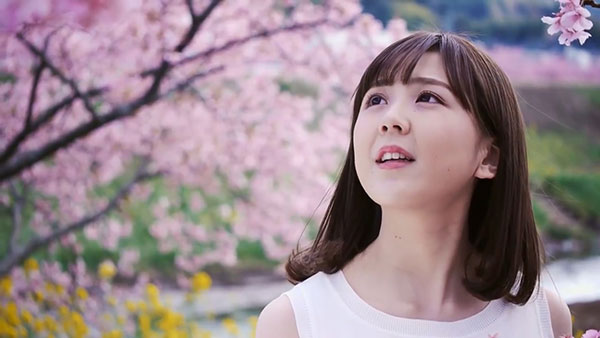 Yamato Rina is a former member of Nogizaka46. A little over a year ago, she was fired after photos were given to Shunkan Bunshun that implicated her in a drinking and dating scandal. It’s funny how some fuzzy pictures ended Yamatomato’s time in the AKS group, meanwhile Sasaki Yukari is pretty much hinting at fellating a fan on Google+ and she’s still in the organization four months later. AKS definitely has a boot, but their aim seems to be just a bit random, yeah? Well, luckily, ‘ol Tomato is back with a solo project under King Records, and it’s pretty pleasant.

Rina’s solo debut video is a pretty simple one. The majority of it features a rural outdoor setting next to some sakura trees. Undertones weren’t missed on this one, huh? It’s pleasant scenery that works nicely for the feel of the song. There are also some indoor shots in what looks like a western style living room that are nice enough, I guess. Most of the camerawork is pretty basic if not slightly cheap feeling, but it’s not bad.

Most of the eye candy in the PV is Yamato Rina herself, in my opinion. I’ve always found her to be a pretty gorgeous girl. Her outfit in this PV is a nice, but generic white one piece dress. I really like her hairstyle in the video, too. While there’s not a lot of variety to them, I really like her expressions in the video. It’s all upbeat and smiles, with no tears or oddly placed stares like spring videos often try to do. It’s all very nice and simple.

I find the song itself to be pretty good. It’s definitely got that optimistic spring feeling to it, but it’s noteworthy to me for some reason. I wouldn’t skip this one in a playlist for some reason. The instrumentals, while pleasant, don’t really stand out that much, and as much as I like her, Rina’s singing isn’t bad, but it’s not exemplary either. Everything about this is technically acceptable, but for some reason, when it’s all assembled I actually quite like it. Maybe the subtlety is its strength for me. In any case, I’m just happy this girl is singing again. Considering she has been recently hanging out with Mikami Yua, I was worried her career might take a very different turn. Heh.