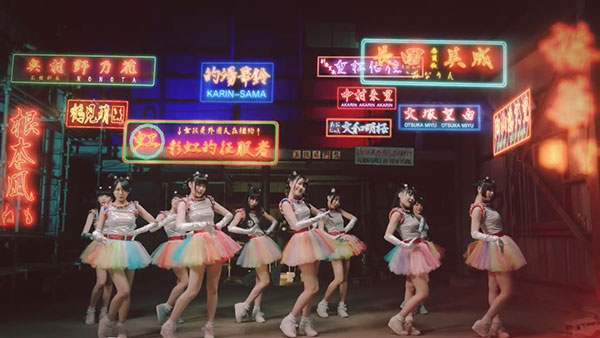 It feels like I got pretty hype about Niji no Conquistador early last year then mostly lost touch with them. There was some bikini PV and then a PV with seifuku that I sorta remember, but I couldn’t tell you much more than that. Their album was pretty nice, if I recall correctly. Luckily, Nijicon has caught my eye again with a pretty fun PV.

This video is full of lightheartedly fun 70’s style sets and effects. Well, smartphone appearance aside, that is. The setting is a mix of film noir-like elements that actually look really nice. I wouldn’t typically expect this kind of production quality from a smaller idol group, but they really pulled it off nicely. However, the video doesn’t take itself seriously at all. There’s plenty of idol poses and goofiness to it. There’s almost a contrast between the setting and what’s going on, but that’s what makes this video unique. I really like it for that reason.

The video switches between group and individual shots, giving everyone at least one or two turns. It’s nice to see everyone get a small chance to shine. The outfits are fairly colorful if not having a “typical idol wear” feeling. They strike me as similar to something Cheeky Parade has worn at some point. There’s also some different clothing for some of the solo shots. It’s all nice enough, but nothing too amazing. The more technical side of things isn’t really what makes the PV, though. It’s more the fun atmosphere. That’s what pushed it from good to great for me.

Song-wise, it’s a very fun track. It’s definitely more memorable to me than Nijicon’s recent offerings. Like the video it has a fairly retro feel to it. This would mix in well in a Cutie Honey soundtrack for sure. Some of it also has a slight hint of old school Hello! Project. Just enough to be noticeable. The vocals are all pretty nice. Nijicon doesn’t blow me away vocally, but I think they have a nice sound to them, and it’s used well here.

Buy on Amazon JP: Aka Ban