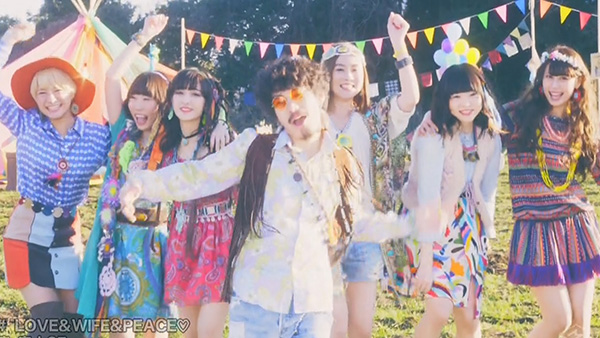 After 15 years of being exposed to various J-Pop, it takes something really special for me to call it weird. After learning about them from Garry’s previous articles, I can definitively say Kiyoshi Ryujin 25 is weird, man. The concept is weird, their outfits are kinda weird, Kiyoshi Ryujin himself is weird…The whole operation just has a weird tone to it. Is weird a bad thing? Nope. In fact, in this case, it’s actually pretty damn fun.

Video-wise, this is a throwback to groovier times. Everything about this video screams 60’s good vibes and flower power. Everything is filmed outdoors, because being inside is where The Man wants you to be, right? The outfits are all very colorful and detailed. Everyone looks really nice and hippie. There’s also really extensive use of some extras in the form of kids and…sheep. Yes, sheep.

There’s no real dance shot or anything too technical about this PV. It’s all just random fun. It works well for the song, but it would be nice if maybe there was a little more depth. It’s hard to avoid the fact that nothing really happens in this PV. Maybe that’s the point, though. My only major complaint about the video is some of the digital aging is a little too good, and some shots look so grainy and over-saturated that you can’t really see anything.

If nothing else, I can say this is the most fun portrayal of polygamy I’ve ever seen. Nervous laugh here. In all seriousness, though, they luckily don’t overplay this “wives” concept too much or make it creepy. Still, it is there, and it’s a bit different seeing the guy in the group being just a bit touchy-feely.

Song-wise, it feels like it would fit in very well with an early 90’s kid’s show or educational video. The instrumentals are very vibrant, upbeat, and hiphop-esque. While fairly cheesy, it’s quite a bit of fun to listen to. That being said, I dunno that I’d listen to it every time it came up in rotation. There’s only so much feel good energy one can take before the cheese starts to grate. See what I did there?