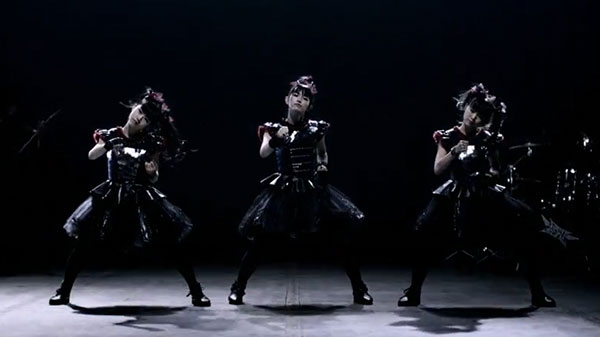 I haven’t paid much attention to BABYMETAL for a while now. There were some external situations that kinda turned me off to them somewhat, and I was also really let down by the Dragonforce collaboration. Still, this group has a cool sound and this release reminded me of why I like them.

The video is pretty typical for BABYMETAL, but it’s also kinda empty compared to some of their previous videos. It features some random imagery, costumes and extras as well as some band action in the background to fit in with the music. It all follows the BABYMETAL formula through and through. It’s dark, kinda edgy, and cool. I’m really struggling to write anything here because I’ve been into this group so long that this all just feels like business as usual.

Those elements aside, though, the video feels almost blank. The background is totally black at all times, and most of the shots are simply group shots or clips of the extras doing their thing. It’s pretty cool in its own way, but it would have benefited from a bit more in the setting. They’ve definitely done much more awesome PV’s. “Megitsune” comes to mind. That being said, there is elegance in simplicity.

I actually like the PV for that same reason. These girls deliver a pretty awesome performance, so only seeing that isn’t too bad. You can usually count on BABYMETAL for pretty great execution. I’ve always been more enamored by the quality of their performance rather than their once exclusive gimmick. Rock idol groups are now a dime a dozen, but BABYMETAL still hold their own as one of the groups who do it right.

Song-wise, I’m liking this song a lot better than some of their more recent offerings. It sounds like older BABYMETAL to me, which I like. This song has a little more pop to it than their recent ones, and it’s kinda refreshing. Maybe I’m still reeling from “Road of Resistance”, but I’m almost hesitant for them to do anything too hardcore again. It’d probably be fine, but I want them to keep doing great stuff like this, even if it’s just a bit more mellow. By BABYMETAL standards, anyway.