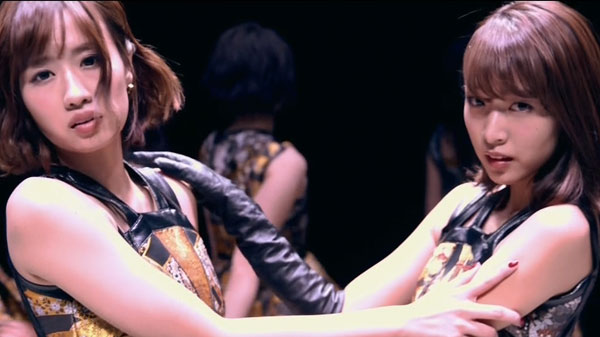 A small, but fun selection this week. 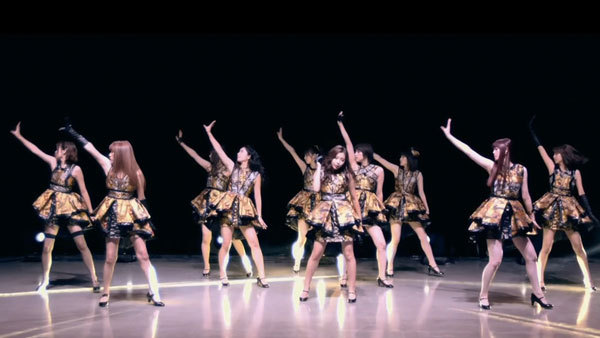 It’s really hard to believe the calendar is about to tick to 2017. Since we’re nearing the end it’s about time we start getting a peak at what releases will start our year off via some new PV’s. One of the first is from PASSPO’s lovely older sisters. If this is how 2017 is going to go, I’ll be a happy camper.

This group is practically built around the sexy card, and that element is undoubtedly in play. Even so, this one feels a bit more tame than some of their past videos. The outfits we see most often in the video, gold and black dresses, are actually pretty un-revealing and downright tame by predia standards. That’s not to say they don’t look great, because they certainly do. There’s quite a bit of intricacy to the decorations on them, so they’re good eye candy even if our fan service is limited to some epic, uh, shoulder action?

Things do heat up on the wardrobe front for a smaller selection of shots that feature the girls in all black getups. The designs vary from member to member, but in general they’re wearing black tank tops with leathery short shorts. This is more in line with what we’d expect from predia. Even though the amount of clothing is higher than average, that doesn’t change the fact that this group features hot girls from start to end, so it goes without saying that everyone still looks great.

Don’t worry about the amount of clothing if you need your erotic idol fill. The choreography and solo shots have you covered. The dancing in this video does lack epic moves and borders on unmemorable, but it does have the usual sexy slower moves we’ve seen in the past. Overall it’s pretty good, but it would have been cool if it had a more memorable dance break or something. The cream of the crop (what a horrendous pun in this case) comes in the form on the solo shots that make use of smashed up cherries and strawberries coated in slimy goo that I’m not sure I wanna know what it is. This sounds better than it actually is, but the girls spend quite a bit of time with the goo and the sultry fruits. The facial expressions during these scenes are most definitely not innocent. The shots comprise a large part of the PV’s sexy aspect and they work. The solo singing shots also feature some good clips, but yeah, the goo wins.

The rest of the PV’s in good shape. Camera work is good about following the action. There’s a small amount of sepia filter over the PV but it works in favor of the outfits and gooey scenes. There’s really no wonky CGI to speak of. The lighting is very good and everything is very clear to see. There’s really no background setting in this PV, but it doesn’t really need one for the type of PV it is. It’s not their most exciting PV in any way, but it’s nicely done and plenty sexy.

The song itself is great. The instrumentals feature a little more kick than I’m used to hearing from this group, and a lot of the composition reminds me of that really enjoyable song (with a mediocre as hell PV) I reviewed from Faint★Star a while back. There’s a lot of electronic elements in play, but there’s also predia’s trademark sound spliced in between them. The vocals are strong as ever from this group. As much as I love what they do visually, their voices are actually my favorite thing about them. Their chorus lines are ridiculously powerful. This one’s a great listen.