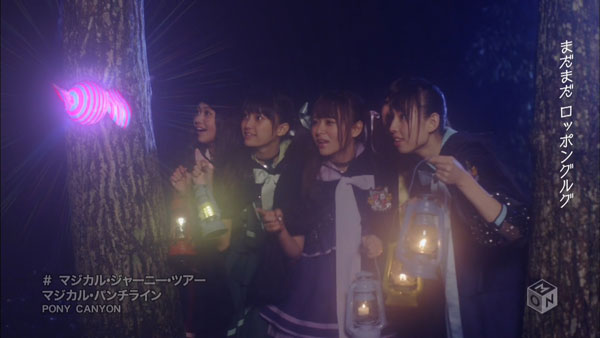 So this PV is pretty loyal to the song in that it presents a, well, magical journey. At first, we see our magical girls performing random little tricks in a tree house so cool that Bart Simpson would be super jealous of it. From there, the girls journey out into the wild forest that seems ripe with random Christmas lights and decorations. I guess they’re not too Christmas specific since the lights are mostly white and the stars could be seen in many ways, but I think we can call it a decent coincidence given the season this PV has been released in. The forest setting makes up a majority of the PV. Some of it appears to be filmed on a sound stage, and a few shots are definitely in the IRL outdoors, but everything looks nice, is well lit, and the stage scenes are well decorated and don’t create any jarring scene changes.

The good scenery continues on with the girls themselves. They’re definitely a cute bunch, and the group’s image of magical girls is well portrayed. The clothing in this video is top notch stuff. Each girl gets a part seifuku, part Harry Potter, part magical girl outfit that looks pretty nice. The fabric has really vivid colors and is well decorated. They are a bit heavy in design so they can look a little bloated on the girls in some scenes, but mostly they’re pretty nice to look at. The colored lanterns the girls are holding is also a nice touch. The tree house shots contain some nice pajama wears. It’s mostly safe stuff, but adds a little fan service element to the video. It’s definitely not something they’ve made a habit of to this point, and considering the age of some of the members that may be a good call. Those looking for that kind of thing can check out Sato Rena’s side work in various gravure magazines. You’ll see much more than PJ’s for sure. Ahem.

The PV has a good atmosphere overall. There is some dance shot to it, and it’s okay stuff. It’s nothing too complex, but this is still a younger group in more ways than one, so that considered it’s acceptable. For now. What really makes this PV shine is the exceptionally done technicals. The lighting is excellent. Considering this PV is shot in a dark setting, it’s very well lit while still maintaining the nighttime feeling. There’s also a well done dosage of CGI to many shots. The girls’ magic tricks often feature it, and it’s sometimes used to accent the backdrop by lighting up the sky, assisting with transitions, or blending into the lighting for added effect. It works very well. Camera work and scene selection are also quite exceptional in this one. Expressions in this PV are always on point which is a major credit to the producer and the members. It may not be overly exciting, but it’s a gorgeous video.

The song for this one is a very nice listen, even if it is a little generic in nature. Overall, it sounds like simple fun pop music. There’s a hint of guitar to it, but mostly it sticks to the usual synthesizers we’re used to in this day and age. There’s also some bells sprinkled in to aide with the magical girl theme. Vocals are pretty chorus heavy but sound good overall. Magical Punchline definitely has a little punch to them in this department, and it’s fun to listen to. So yeah, it’s a nice song. Not quite as rowdy as their previous effort, but it’s nice to know they’re not a consistent wild mess even if that is fun in doses.