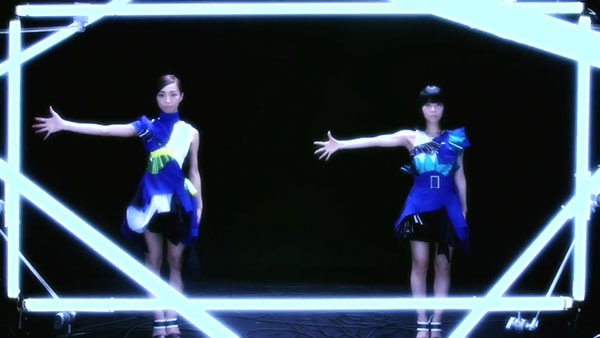 In an effort to not review the same groups over and over, I decided I’d include a blind shot at a group I don’t know much about. My first ping into the void brings forth something enjoyable, but slightly overdone.

The video and song for Faint Star’s latest release are pretty heavy on the electronics. The video is full of CGI, aftereffects, and everything in between. It would be way over the top if it didn’t match the song fairly well. Instead, it’s only slightly over the top. It would be nice if there was a little more longevity to the shots in the PV. There is a lot going on, and while most of it is actually cool, it feels a bit strained for time. Even so, the style is fairly nice. It feels like a mix of Perfume and FEMM.

There is some very basic dancing involved. Well, hand motions mostly. Most of the action comes from the special effects. This video follows a practice we sometimes see in electronic music videos where the performers largely stay still. There’s a lot of face shots of them singing that are quite nice, but pretty much everything else is buried under the polygons. In fact, some of the most intricate dancing is only portrayed in CGI replicas of the girls. It may be an artistic choice but it’s also a disappointing one. They’re a cute set of girls and it would have been nice to see them do a little more in their own video.

There’s only one outfit to speak of in this PV, and I really can’t describe it as much else than a generic dance group outfit. There’s a lot of blue in them, which is nice I guess? Unfortunately, even though this PV has some cool aspects, it kinda smothers itself in them, and coolness aside, it’s hard to avoid the thought that the style looks pretty out-dated. If this were released in, say, 2009, we’d be looking at a cheesy but impressive electronic music video, but as it is now, this has kinda been done to death. The over-execution accentuates this dramatically.

The song itself, I really like. The comparison in my head is FEMM lite with less random English, with a pinch of Nakata Yasutaka. It sounds good. The instrumentals, like the video, also feel like a throwback to mid-2000s electronic J-Pop. The instrumentals are a bit above acceptable, but maybe not quite great. They’re pretty processed, for better or worse.

It’s rare I say this about anything in the idol or J-Pop realm, but while the ingredients for something pretty awesome are all there, they’re just overcooked in this release. Metaphorically speaking, it’s still edible but you can tell something went kinda wrong in the oven.