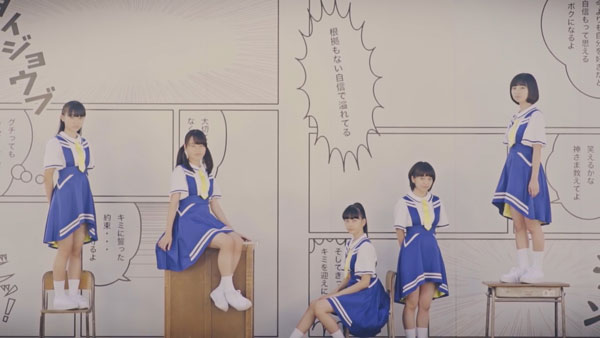 Last time we saw ROCK A JAPONICA, they had a super unique, beautifully presented PV. This time around they still have a gorgeous presentation, but the atmosphere is noticeably stiff, even if it is partially by design.

Instead of magical desks, this PV has a manga theme applied to every scene. Quite a bit of the PV is actual drawn manga panels. My reading comprehension of the Japanese language is too poor to even venture a guess on the details or quality of the script. Going by the art, it looks to be typical high school girl hardships. What I can comment on is the art is actually pretty high quality. It’s obviously made for the PV and not some scan blown up for the video. It looks good, even if it is literally lifeless footage.

The manga theme continues on in the live shots. There are a few scenes where the manga suddenly changes into real life. These shots are neither memorable nor ceremonious. Some aftereffects really would have been good here. Without them, these changes are jarring and disjointed. Don’t get me wrong, they look nice, but they’re not presented with any memorable fanfare.

The PV also randomly dips into some dance shots. For most of the video it’s very brief, but the last fourth of the PV gets a little more PV-like. The dance itself actually has a good amount of choreography to it and is fun to watch. The setting for the final shot is also scenic and pleasant. The outfits aren’t too fancy, but they’re nice to look at. They’re obviously seifuku-inspired. Not the most original, but with enough of a twist to avoid being bland.

Overall this PV is a tad dull, but the high quality presentation makes it watchable. Manga enthusiasts will likely appreciate the attention to detail with the high quality art, and the rest of us can sit through it pleasantly enough while we wait to see our idols in action.

The song itself falls into similar decent-ish territory. It’s a lot less energetic than their previous A-side, but the instrumentals have a nice 90s-like kick to their tempo. The vocals may not have any blow you away moments, but they’re far from monotonous or generic. They’re a good sounding group and this song serves their voices fairly good. It’s a decent effort overall, but their previous release has shown us they’re capable of way more than this.