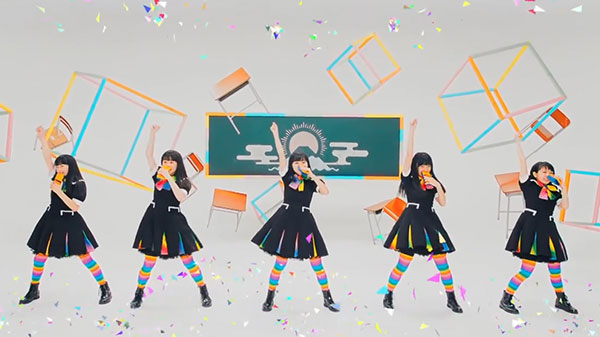 I guess you could call this the wild card pick for this week. I don’t really know anything about this group, and there doesn’t appear to be information about them in English anywhere. Do I get the “I saw them first” award? Either way, they get the “pretty cool PV” award.

It’s a real accomplishment when I can look at anything in entertainment and feel like I haven’t seen the idea before, and this group has kinda done that. I don’t recall a PV where desks play such a major role in the plot of the video. Quite a bit of the video is these individual member shots of the girls sitting in the desks seemingly hovering around to various locations through a residential neighborhood. At first I thought this was green screen, but carefully watching the lighting and wind, it appears these shots were actually filmed on location. Pretty cool. The shots aren’t anything very exciting, just the girls singing to the camera while playing around with the props on their desk, but it’s just such a unique setting that it’s very memorable. Nicely done.

As the PV goes on, we even see the desks stationary and interacting with people in the town setting. There’s also a cool shot of the girls watching a sunset on a roof from the comfort of their desks. Again, not exciting but very unique. We finally bid farewell to the desks somewhat in a dance shot which is filmed in a white room with lots of CGI effects in play. There’s quite a few hovering, you guessed it, desks and cube shapes. The effects are surprisingly high quality, and their viewing angle moves with the camera making them feel almost real. There’s also sparkly effects and such in the other shots too. The effects in this PV are really top notch and well integrated. Combined with the concept, it’s really attention grabbing and fun to watch.

There’s two sets of outfits in play here, both of which are great. In the desk shots, the girls are wearing very colorful outfits that don’t really seem to be following a theme, but are doused in a certain color. Perhaps it’s the member’s assigned color, but their official site doesn’t list them so I can’t say for sure. In the dance shots, they’re wearing these black uniform-like dresses and these rainbow-colored stockings. These are some of the most memorable outfits I’ve seen in a PV this year. I really love the mostly dark dresses mixed with such a splash of color. In an industry that loves to dull or over saturate its colors out of existence, it’s awesome to see a video be so vibrant. The members all look great in this PV.

As far as the song is concerned, it’s pretty nice too. It’s a pretty nice idol song with instrumentals that have a satisfying amount of depth to them. A lot of the singing is high-speed, but the chorus is slowed down to a more normal level. The vocals definitely sound very idol-ish and may not be stand-out, but they fit the theme of the song just fine. It’s an easy listen and works well with the awesome PV. I’ll definitely have to watch out for new releases from this group going foward.