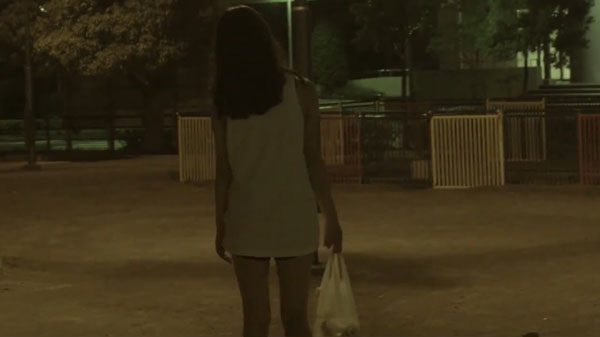 So it looks like Up Up Girls have to sneak in one more PV with their latest single. No complaints here, given who it’s focusing on and the amount of fan service it provides. Do you like Saho Akari with no pants on? Then this one’s for you!

So this PV is not exactly new. The video was originally made for another artist named fu mou who appears to be a dance music guy. Saho Akari did a cameo in the music video. While not labeled as a short PV, this video was made using only two and a half of the songs six minutes of runtime. This is the exact same video, but with Akari doing the vocals. The Akari edition is included at full length on their latest single as a B-side.

While this PV is very no frills, it’s a pretty nice one if you’re into Saho Akari. I’m not sure how to say it any other way. This PV provides a ton of fan service shots. If you’re a fan of legs like this guy, you’re going to get a kick out of this one. Akari’s outfit is a simple white shirt that’s so long it’s bordering on being a one piece. She’s also wearing some shorts to prevent the transition from PV to AV, but they’re so short they’d be sure to break every school dress code you could find.

There’s no getting around the damn near fact that Saho Akari is quite a lovely girl, and the camera doesn’t try to avoid it either. The selection of leg, shoulder, thigh, and various non-face shots is generous to say the least. It’s more than a little gratuitous, but you’re not going to find me complaining about it. There are a good selection of expressions shots too, so she’s not treated entirely as a piece of meat. Damn close, though.

I focus so much on Akari’s looks because that’s about all there is to this PV. There’s a bit of Japan filter in the post production that manages to not be too annoying, along with some after effects in the form of film grain, lens flares, and color splashing effects. It all looks nice enough, but ultimately results in additions that neither add nor detract. There’s absolutely no dance element to this PV. All Akari does is strut around the neighborhood back to her apartment after buying some goods from a conbini. She takes off running in some scenes which give the video a little more energy, but not much. I appreciate the to the point production in this case. It’s a fun little PV.

The song itself is nice enough. I’m not sure what flavor of electronica it falls into, but to me it has more of a dance feel than the recently popular EDM music. The instrumentals are well done but a little repetitive in composition, but I guess for this genre that’s by design. It stands out as being better than average, but it doesn’t blow me away either. Saho Akari’s vocals are acceptable. She’s not Up Up Girls’ top vocalist but she can hold her on when she needs to. It’s a nice enough song in the end, but this one definitely wins on the visuals.