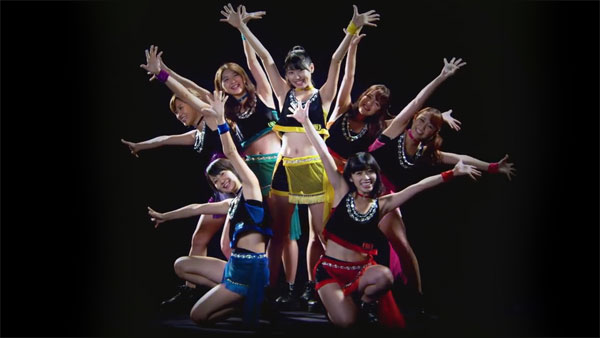 Up Up Girls have been pretty hype this year. Their PVs may not have been the most epic so far, but their music has been very fun and creative. I would also be amiss about my fandom if I didn’t mention that the lovely ladies of this group are looking lovelier than ever. Guy talk aside, I’m happy to see that their PVs are finally catching up to their music.

This PV is a ton of fun. It’s presented in a side-scroller style with a variety of props, extras, and of course the members. The side-scrolling reminds me of a sushi bar that sends things down a conveyor belt. The various “selections” also slowly spin 360 degrees. This aspect gets a little weird at times. It’s always awkward to see people try and keep their eyes straight as they spin. That aside, the presentation is beautiful. The changes in perspective are so well executed, too. It’s not every day you can see an idol group dancing next to a giant piece of sushi and not question it too much. Or is it? This is J-Pop after all.

There’s a good selection of random, inanimate props in the mix such as random food, snow globes, mannequin heads, masks and whatnot. Of course, the obvious attention grabber is the members themselves. As we make our way down the mobile buffet, we see the girls in various get-ups. Most of the shots feature the girls in a simple “(Kari)” shirt, but as the PV moves along the outfits get a bit more silly with random wigs, full body suits, samurai helmets and what have you. The best “costume”, or lack thereof, is easily Sengoku Minami in a bright red bikini posing with a leopard statue. While the other members are definitely giving her a run for her hotness money, she’s still quite the babe herself. She changes poses a few times through the video and they’re all uh…very well angled. Ahem. Yeah. 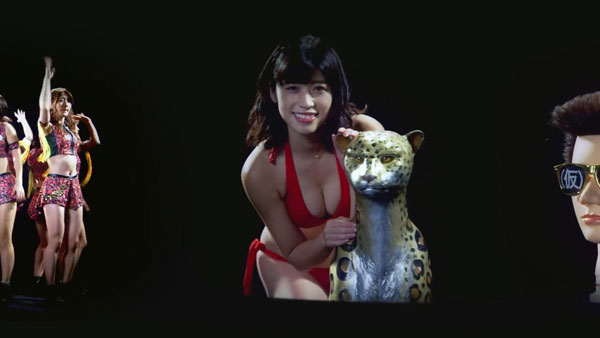 Aside from the random wardrobe changes, there’s also a proper idol uniform that’s used in the dance shots. I’m pretty sure one is from one of their older PVs, and the other is from another video on this triple A-side. I’m glad we’ll be seeing more of the brightly colored outfits with black tops because they look quite nice. As is often the case with Up Up Girls, they’re moderately revealing. With how increasingly gorgeous these girls have gotten lately, zero complaints here. We can also run with the excuse that they are easy to dance in. Yeah, I’m sure that’s it.

So yeah, this PV is a bit simple, but a gorgeous presentation makes it above average. It is a bit hard to miss the repetitive nature of it, but what’s wrong with going back to fun scenes? Maybe it would have been a little more fun if they had just kept using the members instead of random extras, but at the same time Up Up Girls’ inclusive nature is appealing, so it’s kind of a mixed bag in the end, I guess. We also can’t deny the fan service going on in this PV, and I’m not just talking about Sengoku’s display. There’s a lot a fun going on in this video. I think it reflects well upon the group.

The song itself is extremely enjoyable. They step away from the EDM and dubstep of their last few songs, and instead go for a high tempo pop-rock song. It reminds me of some of their stuff from two or three years ago. Although I very much prefer their newer electronic stuff, I love this song because they’ve infused the hype of their newer catalog into this older style. It’s a fantastic song. The vocals are pretty typical Up Up Girls fare. They get the job done, but the primary draw is definitely their overall energy.

Also, it was a nice touch naming a song after Saho Akari’s seriously annoying Twitter habits.