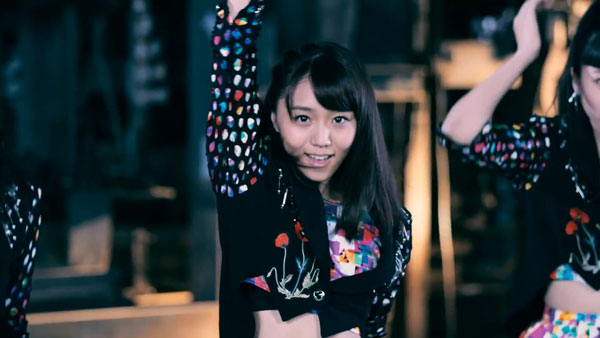 This week on PV Roundup, Hello! Project and their various offspring make it literally impossible to get to anything else!

Last week we looked at the first 33% of ANGERME’s single which I found to have a noticeable lack of hype. Well, this is an improvement for sure, but still way short of the ANGERME I know and love. Where’s their trademark energy?

Some aspects of the PV are noticeably better. The most obvious one is the choreography. The dancing in this one is much more striking, and features individual member shots with continued dancing and singing. This suits them so much better than what they had in the previous PV. It’s good to see them consistently active, and the choreography is nice, bit it still feels short of their usual.

Also improved in this PV are the “story” shots. Instead of just sitting at desks looking at unplugged computers, the girls appear to be taking on a construction project of some kind. Eventually it’s revealed to be a water-based attack on their dancing selves. It’s pretty light on the details and whatnot, but it’s definitely more interesting to watch than seeing them stare at the camera. I appreciate this one being a little more active, but at the same time it all feels like a build up to nothing. Even with the water flying, the girls don’t get wet. The only change we see is some frizzy hair. I’m not saying ANGERME needs to go full K-Pop on us, but for all the buildup we put into crafting these hoses, the end result of a bad hair day is a let down.

Probably the best improvement in this PV is the outfits. They’re much better than the previous offering. In the construction scenes, they’re wearing these extremely nice looking all-white outfits. They look somewhat inspired by something you might see in the field of painting or light construction, but also have a sense of style to them like a hip hop dance outfit. The actual dance outfits are awesome. The tops and shorts feature a pixel-like splash of color, and they interact nicely with the hole-ridden jackets the girls are wearing. There’s also a generous amount of fan service to them. As you may expect from Japan, there are legs for days in this PV.

If only it had just a tiny bit more energy to it. This PV hits par overall due to the improvements mentioned above. I would definitely put it above the previous PV. Where that one’s a weak three star, this one is a solid three star. Not to crap on another group, but if this were something from Morning Musume I might find it more impressive, but this is ANGERME. They’ve impressed me so much since they (re)formed that I just can’t overlook the step down in energy. It’s not bad, it’s just not great.

Speaking of Morning Musume, did they find some electro Musume era songs in the vault and just hand them to this group? This sounds even more like that than the previous song. If you handed this track to me with no context I would think they were doing a cover. It’s not a bad song at all, but this single has really thrown me for a loop being such a similar style. The instrumentals are of a nice quality but aren’t overly memorable.

Luckily, this song delivers some very impressive notes and memorable moments, mostly from Murota Mizuki. My bias aside, it’s only borderline fact that her and Takeuchi Akari carry this group pretty damn hard. Murotan definitely got the best parts of this song, which makes me happy obviously. It’s good stuff to listen to, but I’m still waiting to be wowed like I consistently have been. It’s selfish and demanding, but this group has always done it. Come on, ladies and producers! I know you have it in you! I believe!