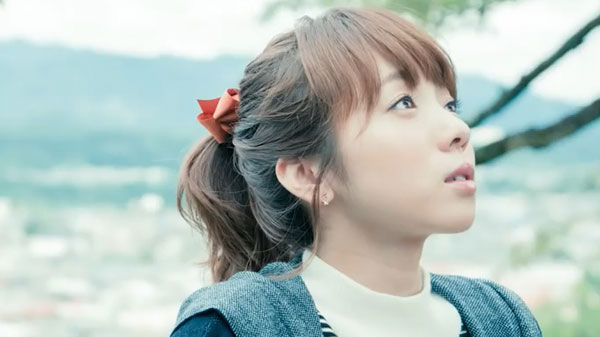 Noto Arisa has been all over the place in her twelve years with UP-FRONT GROUP. Unfortunately, her heyday was around the time UFA was doing a pretty horrible job of managing their talent. She really missed a deserved promotion into a proper Hello! Project group, but such wasn’t meant to be. She’s bounced through a few on-again, off-again projects with the most notable ones being Ongaku Gatas and StylipS. She’s also released the random solo tune here and there. It’s been nearly three years since her last go at it, but she’s definitely not rusty in the slightest.

This PV is pretty straightforward. The lovely Arisa is traveling around looking for great photo spots. Luckily, she has a good setting to explore. The PV is filmed exclusively outdoors with lots of natural scenery. Most scenes take place in a very open park or shrine setting. I particularly enjoy the couple of scenes that are looking down on the cityscape. It’s peaceful, but not empty.

The starlet herself also looks quite nice. There’s no doubt Arisa has grown up into quite the gorgeous young woman. It’s honestly a bit hard to believe she’s 27 years old at this point. The clothes she’s wearing are very civilian in nature. No wild idol twists in this one. She looks pretty stylish and season-appropriate. Her clothes fit in with what I would expect a Japanese girl to be wearing in the fall. Yeah, shorts and all. Japanese ladies are awesome and/or crazy like that.

In contrast with a lot of what we’ve seen lately, this PV doesn’t feature any aftereffects at all. Transitions are just a basic swap and the video is presented more or less as is. There is a tint of Japan filter to it but that’s pretty much a given these days. I think this simple presentation benefits the PV’s setting and the song’s atmosphere. It also brings out the best an Arisa’s exploration of the area and photo taking.

There’s also a light amount of goofing around and dancing to the camera to give the PV a slight idol spin. Most of this PV and song feel more like general J-Pop, which is great. The camera work does a good job of mixing in stationary shots and moving along with the action. It’s very cute and well presented.

As for the song, it’s a pretty generic pop tune, but in a good way. The instrumentals may not stand out much, but they have a satisfactory amount of depth to them. The formula is pretty much straight up pop music with no twist of any kind. It’s honestly refreshing to have a song stick to one style. Meshes are all the rage these days. By far the best part of the song is Arisa’s singing. She has a really lovely voice. I enjoy how she projects her notes with power behind them, but almost paradoxically has a bit of vibrato to her voice. Intentional or not, it makes her voice pretty memorable.