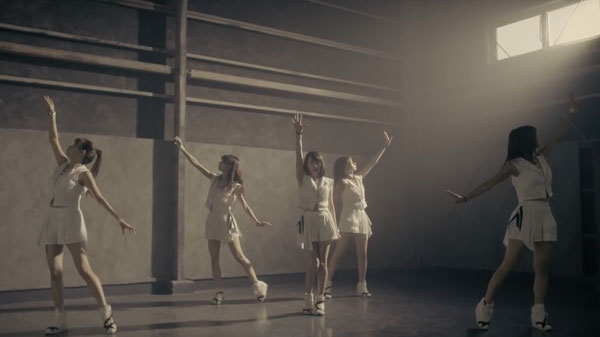 As if a new Miyamoto Karin photobook wasn’t hype enough news, Juice=Juice as a whole is back with a new single. I guess Hello! Project got a little restless with the seasons changing or something. In any case, this is a super hype PV, so I will endure the onslaught of awesome.

The first element to stand out in this PV is the atmosphere, and it remains a consistent and impressive factor throughout the video. For a pop PV, it has a really edgy look and feel to it. While the sets might be H!P’s typical selection of large empty rooms and white backdrops, some awesome lighting really gives these otherwise empty settings a gritty feeling. I think it fits in great with the mood of the song. The steady flow of build ups and cool downs in tempo really work with this lighting motif. Really awesome atmosphere.

There’s also a good selection of solo shots. While they might be simple singing shots, they look nice enough and don’t overstay their welcome over the dancing. In a select few shots, the girls wet their hair down for added awesome factor, and it looks nice if not slightly out of place. Maybe this is who ANGERME was really aiming at! I personally prefer the solo shots filmed from a distance with epic window lighting in play, but we only see those used a couple of times.

While they may not be too epic, the outfits for this one are really nice to look at. Mostly white with a few gem-like decorations on the top, they may not be the most vibrant but they fit the lighting and such very well. They’re also made with a thicker, good looking fabric that feels like something more fall-like in a way. Not to say they provide good cover for the cold, though. There’s definitely a healthy dosage of fan service to them, but nothing too inappropriate. Dance shots only introduce slightly more skin than the lower pace shots. Bottom line, everyone looks fantastic in this PV.

Speaking of dancing, the choreography for this PV might not be very difficult, but it’s damn fun to watch. While perhaps lacking in epic moves, like the atmosphere it just has this awesome attitude to it. The way it adjusts to the changing tempo of the song is totally on point. The fist shaking and reaching out moves also compliment the song’s upbeat lyrical tone in a memorable way.

The way the members compliment each other’s dancing is also noteworthy. Throughout the video there’s a lot of hand-off where one member will deliver a big move while the rest pause, then the next member pays it forward. This PV does a very good job of featuring everyone. The camera work and such is top notch, and aside from some possibly added lens flares, special effects aren’t present and aren’t needed.

As for the song, I think it can get a little repetitive but overall it’s pretty hype. The instrumentals are pretty synthetic, but have a really good rhythm to them and the regular changes in tempo keep things pretty interesting. I’m usually not one to comment on lyrics, but since H!P is so awesome about subbing their PVs, I can say that I find these lyrics to be pretty cool. The song is very upbeat in them, with a constant “You can do it!” theme in play. As I said above, the PV ties into that theme pretty well. It’s a very nice addition to their discography.