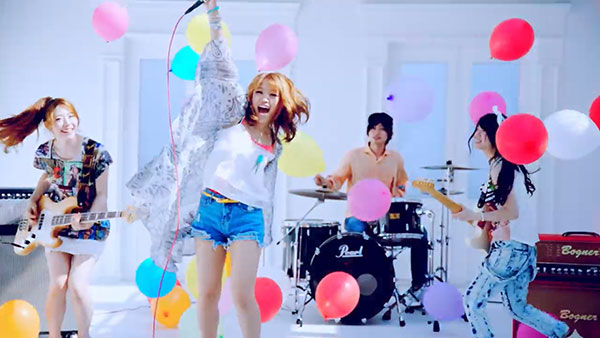 To this point I’ve stuck to idols in PV Roundup, but the boss man has said I could divert from this if it’s within a similar atmosphere. Since this group is mostly female I’d say they qualify. Chu’s day is a band that’s pretty new to me, but I’m already pretty taken with them. Doing a little research, it looks like they only formed in 2014, but have already performed at many larger venues such as SHIBUYA-AX, Zepp Tokyo, O-WEST and so on. They’ve got good instrumentals behind them, really pretty members, and a lead singer with some serious vocal power.

Sadly, despite a lot of hype, there’s some gripe on this one too. It’s pretty obvious from the start, huh? This PV is extremely bright. I really wish I understood why Japan is doing this to their content. Is it to make it look vibrant like it’s outdoors or something? Sorry, but personally I’m a fan of the ozone layer. It’s really hard to have too much to say about the background because it’s totally whited out in most shots. In some wide angles we do see what looks like to be skylights and a door behind them, but mostly it’s just a white blur. At least the video has decent production value otherwise. Scene selection is nice and the camera follows the action well.

Focusing on what we can see, all of the members of this band look great. Everyone’s dressed up in pretty trendy looking clothing with bright colors and only a kosher amount of fan service in play for the ladies. It works well because they’re all quite pretty. This video definitely plays up to the girls much more than our drummer dude, but he seems alright, or so I would assume. I’m not really qualified to review him.

Since this is a band, the PV sticks with the very typical band performance formula. For what it is, it’s pretty fun. The video does a good job of featuring the girls, but the drummer guy could use a little more love, too. Then again, in most of his shots he’s not even looking up or seeming like he’s enjoying being there all that much, so maybe it’s not such a bad choice. The only scenes that stick out from the formula are toward the end when some balloons drop and the girls look more happy then seriously performing, but mostly, it’s just a staged, fun live performance.

For better or worse the song outshines this PV exponentially. As I said before, I’m really into how they sound. It’s kind of like Ikimonogakari, but with much more energy. The instrumentals sound very rich and the energy is consistently high. As for the vocals, man, I absolutely love ERI’s voice. A lot of her notes remind me very much of Kuroki Nagisa, which is a major compliment. The way her voice flows between notes is really awesome. I wish the PV was as flawless, but it’s still a nice release.