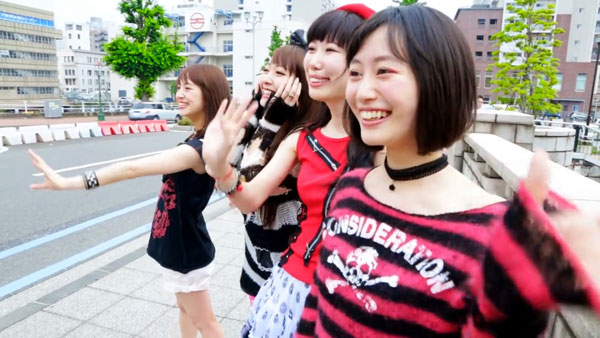 So, in order to try and not make this editorial a Keyakizaka46 festival, I dug around for any other PVs that were out there. Not a lot to choose from this week, but I saw something from this group that I’ve heard the name of a time or two. Some quick internet research reveals notall markets themselves as “social idols”, in that they participate in social media a lot. Or something. I wasn’t able to find much elaboration on English language idol resources, but they have their own app so that’s cool I guess? In any case, this most recent PV has pretty much made me a fan.

At a first glance, it looks like this PV is going to have a bit of a party theme, and indeed it does. Quite a few shots are filmed in a moving bus that’s been decked out in balloons, streamers, and other colorful goodies to give us the party vibe. We see the girls preparing some simple food, making decorations and then enjoying the spoils of their labor by goofing around, dancing, and eating their delicious goodies. Mixed in with this are some singing shots where they play up to the camera. These shots are definitely fun and many have a flirtatious feel to them in the form of winks, loving stares, and even some less than subtle innuendo with tongues and coke bottles. Uh huh, there’s some pretty top notch fishing going on in this PV.

There’s also a handful of scenes with the girls looking bored, then running after the bus in office lady outfits. OLs wanna party, huh? The office outfits look nice enough, but the wardrobe awesomeness comes with the party shots. All of the girls are decked out in really awesome looking, colorful, goth inspired outfits. I’m really not in the know to tell you the brands of this stuff, but the girls look absolutely fantastic in these clothes. I really dig the colorful take on a style that’s usually pretty dark. Amazing job on the outfits for sure.

As far as the technicals go, this PV is a pretty general party video. There’s really not much of any dancing and the video mostly sticks to the party bus shots. It’s not a bad choice at all. Despite being really cramped at times, high quality camera work and scene selection makes this a really fun PV to watch. Post-processing and aftereffects are largely missing from this video, and that’s a strength I think. Colors are brightened up a bit, but still look very natural. With the shots as tight as they are most of the time, silly effects would only get in the way. All in all, this is a party video done right.

As for the song itself, it’s very catchy and fun. The instrumentals have elements of ska to it. I mean, it’s not really ska, but the instrumentals feature a lot of synth that sounds like stuff you’d hear from that genre, and the tempo is very similar too. Vocals from the members are all very satisfying, too. It’s also worth noting that this group is older than your average set of idols with their youngest member being 21 years old. It’s refreshing from time to time to see that.

This PV has definitely made me a fan of this group. I’m going to have to learn more about them and check out their back catalog for sure. A+ effort, ladies.