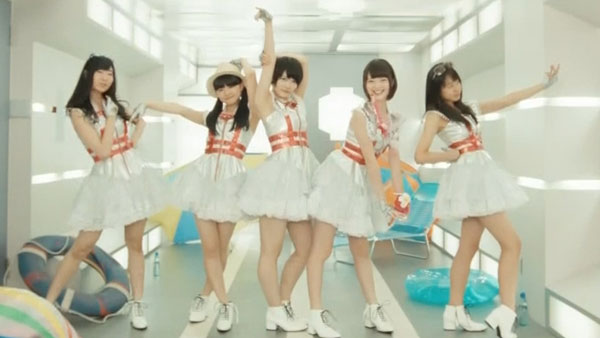 I don’t really know a lot about Party Rockets GT. I know they’re a sister group of Tokyo Rockets, and that’s really all I know about Tokyo Rockets, too. A quick read of their history on an English wiki site tells me they’ve changed labels, management agencies, and members many, many times, but despite their instability they’ve pumped out a pretty decent video for this release.

The video begins with Haruka, who Google claims is the leader of this group, getting ready to dive into the wonderful world of VR. Alright, idols and VR. Surely were going to some magical land with cupcake mountains and being moe is a legal requirement. Looks like there’s no budget for that, because the rest of the PV takes place in a pretty generic looking long corridor that looks like an old Star Trek set. Honestly, it reminds me of early 2000’s PVs where walking down hallways was a thing in videos, except we’re pretty stationary in this hallway. As far as settings go, this one is kinda cold.

Luckily, the showmanship of the girls is the exact opposite. The dance for this one is a little more on the chill side, but well executed and fun to watch. There’s also numerous shots of member interaction with random props that show up for no reason, and those scenes are pretty fun but sometimes hard to see due to the the scrunched space of the corridor making them space out toward the back of the room. Some of these scenes are even shown at a high rate of speed, which makes it even harder to take it all in. Probably the best shots in the PV are the ones where the members get some solo screen time. All of them do a pretty good job of pandering to the camera and, if I may be honest, they’re all pretty cute.

The rest of the video’s aspects are alright. The outfits are these mostly silver one piece dresses that have red accents on the tops. They look okay but aren’t overly memorable. There’s some aftereffects in play with this PV, but they aren’t relied on heavily and don’t really stand out either way when they do. The camera work is okay, except for the previously mentioned scenes where the action is taking place a little too far down the corridor. The solo shots are well done but it’s hard for them not to be in this tight space. The video is a little on the bright side, and it’s hard to tell if this is post-processing or just excessive studio lighting, but it’s not too bad.

As for the song, it’s enjoyable. It’s definitely a play it safe idol pop rock song. The instrumentals feel pretty generic and could be easily mistaken for a lot of other group’s stuff. It’d be cool if it had a little more originality to the song, but what’s there is fun to listen to regardless. The vocals are decent enough. I like how they sound as a chorus, but the solo lines are just alright. Despite the average quality it’s got enough energy to be a worthwhile listen.