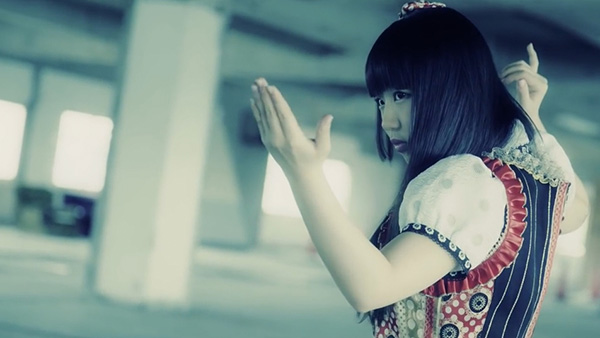 I’ve seen the name KOTO around on Twitter and the like a decent amount lately, so with a new release uploaded to her channel, and not much else to review this week, I thought it’d be a good time to check her out. Apparently this girl has some notoriety behind her for good showings at dance competitions as well as representing the CHEER apparel brand. All I can really speak of so far is this PV, and it’s a nice one.

The theme for this PV appears to be boss battles. The entire PV consists of KOTO facing various challengers and defeating them in various, usually cute ways. We get to see a face-off against a martial artist complete with slow motion effects and a highly unlikely, but hilarious victory. Next, we come boob-to-face with a random sexy lady for a pose-off. KOTO doesn’t really have that kind of look to her, but she’s definitely cute and manages to win the showdown by relying on her moe talents. It’s my favorite part of the PV. Very cute stuff.

Finally, we have a dance off of sorts with an idol-like girl in a mask. This scene was kinda disappointing honestly. The dancing is all done at high speed and not really visible. For a girl who apparently rose to fame in part from her dancing, it’s really disappointing that we don’t get to see that in this PV at all. Everything revolves around the story elements, but at least most of it is really amusing to watch.

There’s only one outfit to this PV, but it’s pretty nice. I’m not really sure how to describe it other than a really fluffy dress. Its got quite a bit of decoration to it, even though the style is pretty typical idol wear. The colors are a little on the dull side and typical for Japanese fashion, and look nice. There’s also a lot of patterns in the fabric. I’m running out of ways to describe an idol outfit, so I think I’ll stop now. It looks good!

The technical side of the PV isn’t very technical. As described above the PV sticks to one theme and there’s really no aftereffects or other elements to it. The set is also pretty bland. It looks like this video was shot in a parking garage or some other unmemorable place. What is there is presented well, though. Scene selection is pretty good and the shots do a good job of focusing on the fun. There is quite a bit of color dulling in this video, but it’s survivable.

The song itself is just okay. The instrumentals sound decent but cheaply made. I like the 8-bit elements it has, but it doesn’t rely on those too much and everything else sounds like shallow synthesizers. They sound okay for what they are, but it’s hard to miss. The vocals sound like that of an average idol. If you’re into this kind of music you’ll probably find it good enough to listen to, but nothing to write home about. All in all, it’s a nice release with the highlight being the PV’s silly moments.