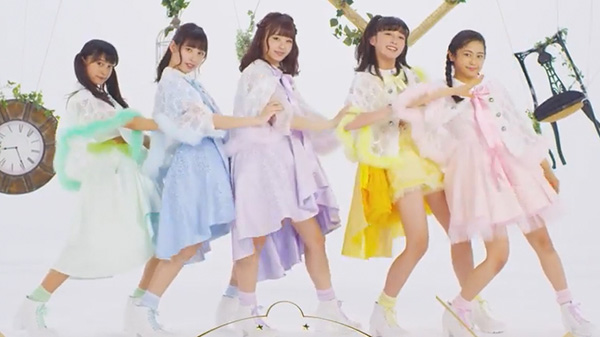 It feels like its been ages since Idoling!!! disbanded. In reality, it hasn’t even been a year. Well, one girl has made a return to the world of idol groups, and it’s none other than Sato Rena. I had a really on and off relationship with Idoling!!!, but got back into them pretty deeply in the last two years they existed. Sato Rena was definitely in my top three. Rena joins four other girls to form Magical Punchline, and their debut is definitely…unique.

I really had no idea what to expect from this group going in, but with Sato Rena at the front, I was expecting something cute and typical of idols. When this video begins, it’s anything but. We’re treated to a really epic intro featuring music you might hear in a Harry Potter trailer or something, leading into guitars while we look at this stylized map of locations that seem to be parodies of otaku locations, including Akivalhalla, and a not so subtle fortified town called Nogi Saga…Okay?

So we’re going hardcore on this? Alright, then. Well, as the intro ends we dive headfirst into…a typical idol tune. There’s no warning, rhyme, or reason to anything that comes next. The pop portions of the video are covered at the top and bottom by a constant, non-transparent overlay. It looks kinda gaudy and unnecessary. It also features constantly moving animations and color changes, but somehow it’s manageable and not a video killer. Even so, I really detest such things in PV’s because they’re just annoying. Perhaps it’s to distract from the totally white set with the most random decorations I’ve seen in quite a while.

As we progress along, the song transitions into rapping for brief segments. In the video, we stay with the main shot for these. Sato Rena throws some signs at us which is hilarious in a “what the hell am I watching” king of way. Not long after that, the song takes a rock twist and we see the girls head banging in a dark room. The overlay disappears which is a good choice for these darker shots, or the whole PV really, but it’s hard to see much of anything period. The song continues to flip around these elements for the remainder of the play, and the video follows it as described above.

The outfits feel like pretty average idol wear. Apparently the girls are assigned colors in this group, and they’re dressed almost completely in these colors. The outfits have an almost princess-like quality to them, complete with capes and whatnot. They look nice enough but aren’t too exemplary.

The production of the video does a good job of following the insanity of this song. Many transitions are quite fast and scene changes happen on a whim, much like the song. Somehow, it manages to get good shots of every member wedged in and feels very balanced. At the same time, it’s pretty easy to watch this video and get just a tad motion sick. In the end, I’d still call the production good, though. I could seriously live without that overlay, though.

I’ve talked about the song already since the PV follows it so deeply, but I’d say overall I like the song a lot more than the PV. It’s really random, but also a decent amount of fun to listen to. The instrumentals are pretty good quality and the singing is on the better end of the typical idol voices spectrum. The members all perform and sing on par with each other. I was really worried Sato Rena would wreck these girls with so much more experience under her belt, but they seem to work well together.

All this being said, I don’t know that I’d call this PV or song anything amazing. Honestly, when I watch this I get the feeling they were just trying to copy Wa-suta’s style and didn’t quite get the formula down. I really can’t find much to pick on about this release, but it just feels like it fell a little short of its potential. Maybe it’s a little too random. I’m really not sure. I enjoyed this release, but it is excessive on assaulting on the senses.