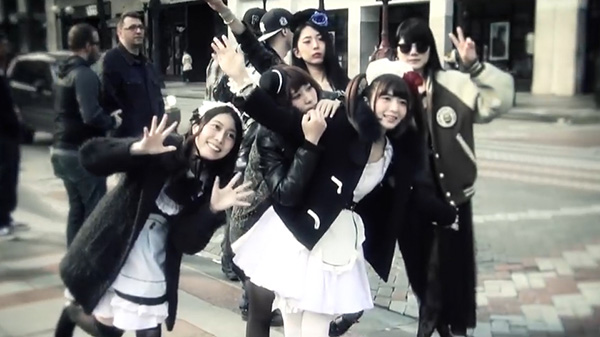 Once in a while, we’re lucky enough to have Japanese music acts come to us foreign fans. In March of this year, BAND-MAID performed to an audience of around 2500 at Sakura-Con in Seattle, Washington. I really wanted to go, but funds didn’t cooperate. I really regret not being able to see this group since they’re on of my favorite acts. In any case, they’ve released a new PV that uses quite a bit of footage from their visit to Seattle, and it’s a pretty awesome tribute to their trip.

We’re treated to quite a bit of live footage from their gig at the convention, and it looks like a ton of fun. I haven’t been to many shows with live music, but the few times I have its always been great. There’s something to be said for groups that play their own instruments. It definitely adds a whole other dynamic to the show, and it’s pretty rare in this genre of music. These live shots really show the atmosphere of the gig, and everything looks so energetic. The girls seem pretty thrilled with their reception, and that’s awesome to see. I love all of this footage, even if it makes me feel a little (more) salty about not being able to go. Hopefully someday.

When we’re not seeing the live show, we get to see footage of the girls just walking around Seattle. A lot of it is really candid, which is nice to see but not everything going on is that interesting. One thing we do get from these shots is something we rarely see from their PV’s: silliness. There are a few shots here and there of the girls goofing around, throwing peace signs, and other silly Japanese girl musings. I thought it was a nice change from their usually serious demeanor. Not that I mind them being so hardcore, but it’s nice to mix things up once in a while.

There’s not a lot going on in the technical side of the PV, but there doesn’t really need to be for this kind of video. Since it’s all trip footage, there’s really nothing in the way of choreography specifically for this PV. The live footage is well presented and stands on its own just fine, and the Seattle exploration feels really natural. It makes this PV feel less like a production and more like a labor of love for their successful trip. The shot selection is pretty good and while the transitions can be a little rapid, they mesh well with the song to avoid any sense of jarring scene change. There is a little bit of color filter applied to the PV, but it at least fits the atmosphere of the video. I’d still prefer it be less, but you can’t win ’em all, I guess.

As for the song, it’s BAND-MAID, so how can it not be good? Fanboyness aside, I really dig this track. Instrumentally it’s one of my favorite from their latest mini-album. I really love the Don Henley-like riffs at the beginning of the track that smoothly transition into a fairly typical BAND-MAID song. As always, the guitar work is really high quality, and the vocals are rock solid. It’s really awesome to see this song get a PV, much less a PV celebrating their first visit to the United States. I hope it’s the first of many more. There’s no doubt in my mind this group could find plenty of popularity here.

“Before Yesterday” is part of BAND-MAID’s third mini-album, “Brand New MAID”, which dropped May 18th.