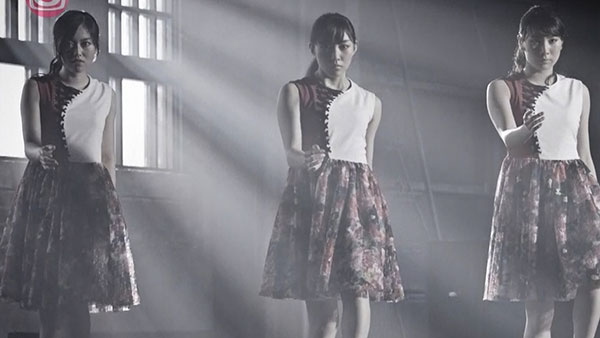 callme has been pretty consistent in delivering great videos and songs, so I was pretty excited to hear they were releasing a new single so quickly.

This time, callme goes for a retro artistic feel in their video. Not really surprising as this theme has been everywhere all year in Japanese music. A majority of the video is filmed in what looks like an oddly decorated 1920’s police station lobby. The sets are pretty consistent in this retro feel. A few of the girl’s solo and solo dance shots are filmed in other areas that give the same feel as the primary set. There’s also a generous use of color filter to add to the atmosphere, but it fits in perfectly with the motif so I have no problem with it. I really like how reds are made to pop a little. It gives the scenes a very film noir feel. Really well done.

The group dance shot outfits don’t really look retro, but they don’t contrast with the other visual elements either. As I said above, the red on the tops stands out in a good way, and the patterns on the long skirts also have some color to them that gets some bias in the post production. In some of the solo shots, the girls are wearing t-shirts and pants with light materials, like you might expect to see in a practice session. It doesn’t really help or hurt the theme.

Hayasaka Koumi’s shirt in particular is almost a little fan service-y. My preferred shots are the close ups of the girls in their primary outfits and wearing hats behind an open set of window blinds. They’re some of the most atmospheric parts of the PV. They’re so well shot, the hats are cool, and quite frankly, these girls have super gorgeous faces. Just sayin’.

The choreography is about what you might expect from a callme PV. The dancing may not be super technical, but what they do, they do very well. I really like the hand movement parts of this PV. The members are in noticeably great sync when they do it. The solo shots are also pretty lively and interesting. The PV doesn’t stray too far from the dancing, but we do get those occasional singing and resting shots and they’re all really nicely done.

There’s some especially memorable scenes to me toward the end of the chorus parts of the song where the girls are walking toward the camera. It’s short, but it’s kinda sultry. You can see what I’m referring to at the 1:47 and 4:14 time stamps. Good stuff. Camerawork is also very satisfactory in this PV. The transitions aren’t too snappy and the scene selection seems really good.

As far as the song, I may give it just a little flack and say it feels like a total retread of their past stuff. That’s hardly an insult as their discography has been a nonstop train of excellence, but they usually mix it up just a little more than this. In any case, the instrumentals are a nice mix of synthesizer pop elements which a good amount of depth to them, and the singing is as soothing as ever.