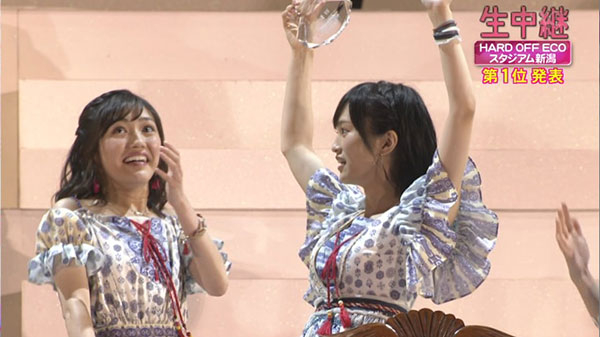 So how about Sasshi winning the sousenkyo with nearly a quarter million votes? I don’t really have a cute intro, so I thought I’d just rub it in a little. It’s time to round up some really awesome recent PVs. Forgive the lack of haterade in this one. 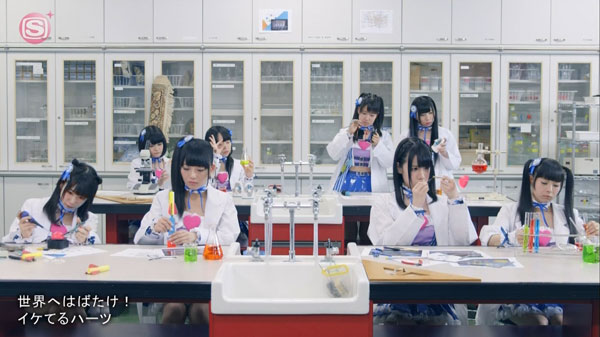 Iketeru Hearts is one of five idol groups that are part of Stand-Up! Project. Their most popular offering is probably Afilia Saga, but I tend to think of Iketeru Hearts first. This is mostly thanks to Arata Yuuyu on Twitter and Showroom. She’s pretty famous in my circles for having a very high level of English ability, as well as spying on all of us western fans. It seems once in a while, she starts giving us random favorites of tweets not even related to her. Yuuyu aside, my fandom of them is kinda lukewarm. They sometimes have a fun song, but I’m not consistently wowed. This one though? Pretty fun stuff.

The first thing we get an eyeful of in this PV is the dance outfits. They’re really pretty! From the back you might call them one pieces, but the fronts have an exposed midriff. If belly buttons are your thing you’ll enjoy that. Skin aside, they’re mostly blue and white and decorated with a heart on the chest, and three belts, two of which seem to be support for chesticular fortitude. These are the only outfits we see in this PV, but that’s okay because they’re really nice and intricate.

The second most noticeable thing in this PV is the atmosphere. Most of the shots have a comedic element to them. The Iketeru girls appear to be researching a way to fly. When we transition to these scenes, the girls even put on lab coats to show just how serious they are about this venture. The room they’re doing all this in looks like a real science lab with lots of cabinets in the back, and some random exhibits and machines around that they occasionally interact with. Most of the “experiments” are them just playing around with air-powered foam rocker launchers, small fans, and other nonsensical things, but the real science stuff adds a level of authenticity to it. It’s a really nice set for such a silly joke. I like it.

In between idol physics, we’re treated to some dance shots. Most are filmed in a large room that looks elegant, but generic and somewhat empty. H!P-ish, in other words. As far as the choreography goes, it’s good quality. It’s not super intricate but it has a good amount of variety and movement to it. The outdoor dance shots are my favorite as they feature a mix of fun and choreography. My favorite part of the PV takes place at the three minute mark when Manami Kazune rips off her lab coat to start the final dance number, as well as solve the mystery of flying. It’s a really great way to transition to the final part of the video.

Overall this PV is put together really well. It presents all of the elements they chose to include wonderfully and the camerawork is nice. Colors in the video are filtered just a tiny bit, but it’s barely noticeable most of the time. If I had one complaint, I find the individual member shots are a bit short. Divert your eyes and you can miss stuff pretty easily. It’s not bad enough to be headache inducing, but when you’re trying to find your member of choice it can be a little off putting. That aside, this is a really fun, high quality video.

As far as the song goes, it’s nothing revolutionary but I dig it. The song is pure pop with some electronic elements driving the instrumentals. It definitely has a Stand-Up! Project feel to it, but that isn’t necessarily a bad thing. Basically I’d call it a good Afilia Saga-like song. The vocals fit very well with the atmosphere of the song and everything sounds good together.