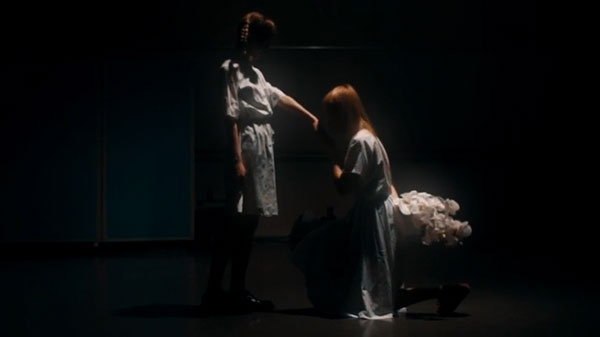 Oyasumi Hologram recently released a new PV for a song from their latest album. Given how awesome that album was, it was definitely worth a look. This PV might be one of the better videos of the year as far as artistic value is concerned. Well, in my deviant opinion anyway.

The non-sensual scenes keep on with the artistic theme. There’s clever usage of minimal lighting, lens flares, and other visual tricks to really make this PV an epic piece of eye candy. It’s very easy to miss the fact that this PV largely takes place in an empty room. Only in a few shots is there enough light to even notice. Other shots make use of water for effect. The underwater shots aren’t used extensively, but when they show up they look wonderful. In a few other shots, the girls are standing about waist deep in the water with slightly wet hair. These shots are also really nicely done. The lighting in this PV really makes everything and everyone look fantastic. It really sets up an awesome mood that ties into the sound of the song very well.

The camera work for this PV is pretty good. Well, it seems pretty good. I can’t really say for sure if it’s the camera work or the artistic merits of lighting and such, but in any case the presentation is just beautiful. If there is one thing lacking, I’d say the outfits are a bit on the unmemorable side. They look like half dresses, half scrubs, but they aren’t really the focus of this video so it doesn’t matter as much in this case.

As for the song, I personally found this track to be one of the most memorable on the album. It starts off really nice and soft and works its way up into Oyasumi Hologram’s more typical rhythm. The singing is butter smooth as expected from this group. Their sound is definitely unique and may not be for everyone, but if you “get” this group…it’s a total piece of ear candy. I’m so hype that this song got such a fantastic PV.