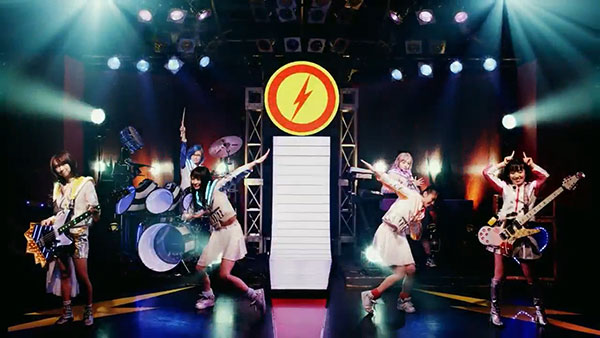 Gacharic Spin is a pretty fun group that consistently puts out enjoyable rock tunes with fun but mostly average PVs. This one may not be mind blowing, but I think it does challenge their status quo just a small bit.

It’s clear right away that we’re getting another band performance PV. This is clearly this group’s preference and it’s a bit of a mixed bag. On one hand, it’s nice to be spared a potentially crappy gimmick, but on the other it’s a bummer to miss a good one. The PV for “Don’t Let Me Down” from last year showed that the group could throw a little fun into their PVs without losing their rock edge, so in a way this PV does feel like a step back from a creative standpoint.

At the same time though, what’s presented here is nice. The set is quite lively with lots of variable lighting, and the embedding of lyrics on various surfaces and clothing at the beginning is pretty cool. I guess ultimately, it all evens out.

On the topic of clothing, the outfits for this one are pretty nice. They’re mostly white tops and skirts or shorts, but they are highlighted with each members’ assigned color, and they feature some cool lighting on the colored part of the tops. I’m not sure how comfortable they are for the girls, but since lighting is a huge part of the atmosphere here, it’s a very nice touch. The members look as pretty as ever, and it appears the two guitarists have switched hair styles since I last saw them. Speaking of, the guitars are also decked out with lights and such. F Chopper Koga’s bass is almost overdecorated. I can’t imagine how heavy it must be.

One thing this PV has going for it is it has more choreography than your typical live performance video. This group has two members that are dedicated dancers, and they make really good use of them in the PV. While the band members do really good in their roles, the two dancers are pretty prominently featured. This is a nice change compared to some of their previous videos where you hardly saw them. Since dancing is their only role, they excel at it here.

Most of the dancing isn’t too intense, but it does have its moments. The two girls also have really impressive sync. I also enjoy how they will often be in the background of some of the band members’ solo shots. It’s a really awesome change from just a still backdrop, and the dancing in these shots is toned way down so that they’re not a total distraction. Definite props there.

Another plus of this PV is the camera work and scene selection are above average. The aforementioned shots of the lyrics embedded on random objects is really smoothly done, and the transition in general scenes fit the rhythm of the song really well. It’s awesome when a video can really get into the song it’s trying to promote. It’s not always done well. I’d say everyone gets a really good amount of screen time.

The song itself is much like Gacharic Spin’s previous offerings. It’s a bit lighter on the rock during the verses, but they definitely rev things up for the chorus. The last minute or so of the song is super fun. It’s one of the best finishes I’ve listened to in a while. Overall though, it’s not quite as gripping instrumentally as their previous stuff. That’s not necessarily a bad thing, in fact I think it’s pulled off very well. The vocals are par for the course with this group. If you’ve liked their past stuff you’ll be satisfied here.