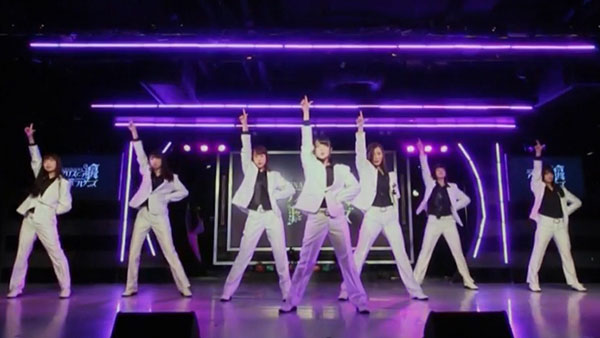 I can’t say I know a thing about Aliceinalice & Friends. I ran across them on Twitter a few times through retweets from other underground idol groups, but the push to check them out came when I learned that Imade Mai has something to do with this group. For those unaware, Imade Mai was a kenkyuusei in SKE48 for about two and a half years before graduating. I held her in very high regard for her cool personality and gorgeous looks. She’s since launched a somewhat active solo career, releasing some gravure and even a photo book I’m sad to say I haven’t seen yet.

I’ve seen some conflicting info about Imade Mai’s status with this group, but the official web site lists her as a member, so hopefully she is there to stay. Anyway, back to the group. It seems they’re pretty new and this is their first major single. That being the case I gotta say, this is a really awesome first effort!

It seems simplicity is a theme this week. This PV takes place in a hostess club-like setting with most shots filmed on a stage. A few shots take place around the spacious couches we’ve seen associated with such establishments, including some scenes where the alcohol is flowing. The PV doesn’t play up to the club theme that much in the end, but it’s good enough. The camerawork and scene selection is really good. Some parts of the song have a comedic value to it, and the video plays up to it very well. I’m also in love with the lack of color filter. For that reason alone I should give this damn PV five stars.

Some research into this group reveals a lot of these girls are up in age by idol standards. Takahashi Asuka, the leader of the group and center of many shots, is at least 28 years old. She doesn’t look it at all, but it’s cool to see some more womanly idols around. The girls look fantastic. I’m writing this roundup right after finishing THE HOOPERS, and while this isn’t dansou, the suits they’re wearing are definitely a turn on. These white suits are really nice looking and fit the theme nicely. I’ve really taken a liking to the leader Asuka, but it’s hard to look away from Imade Mai. She’s so fine, man. This whole PV is really great eye candy, though. Simple, but so well done. I love it.

As for the song, I think it’s pretty great. It does have a bit of a club-like feel to it like most current J-Pop, but it has a generous dash of idol fun and randomness to it. The transition-less rap part of the song is particularly amusing. The instrumentals are a tad generic at times, but the girls make it fun. Their vocals are pretty nice, but not mind-blowing. For a first single, I think this is great. I love the energy of the members, and this will be a group I keep an eye out for.