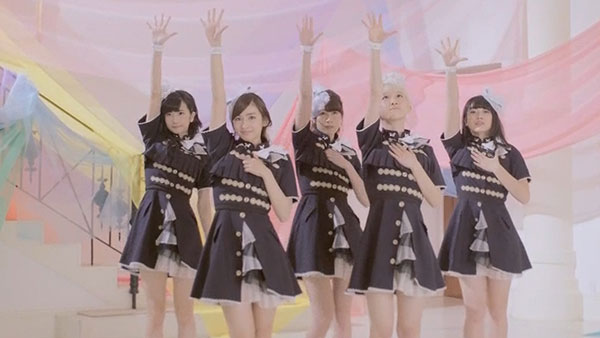 Doll Elements is a group I follow to the extent that I can barely say I follow them. This is a group I check out if I notice a new PV is out. They have some cute members and catchy songs, but that’s all I could really tell you about them. This isn’t their strongest offering by a long shot, but it’s passable.

A majority of this PV takes place on a large set decorated by colored curtains hanging all over the place. It’s not exactly exciting but it’s better than an empty white set. Some shots are done in a dining room setting with a girl doing random, inane stuff. Doll Elements has made extensive use of kid extras in their PV’s before, so I guess that’s one trademark of theirs in this PV. I think it might even be the same kid. There might be some story behind it, but I don’t know it. Sorry.

There are two sets of costumes for this PV. The first we see are some blue uniforms with skirts that I can only describe as typical idol wear. There’s a generous amount of buttons on them which I guess is kinda unique, but mostly it looks like the same ‘ol seifuku wannabe idol stuff we’ve seen too many times to count. They’re nice, but plain. The second set are flower-laden one pieces with an overall red color. They’re cute enough but I prefer the former outfits.

There’s plenty of dancing in this PV which is nice. The kid extra’s stuff isn’t used enough to call it intrusive, but I’m not a fan of how it takes away from member time. This is a group of five girls, after all. I’m pretty sure they can give them all something to do to pass the time. Overall, this PV is very average. Doll Elements’ PV’s usually aren’t terribly exciting, but this one is bordering on dull. Not quite there, but damn close.

The song however, is a tad dull. The vocal work is alright, but the instrumentals sound cheaply produced and generic. It’s listenable, but that’s about it. Luckily there’s a bit of energy in the chorus parts that lift the song up a bit, but overall it just doesn’t have a lot of grip to it. This group is definitely capable of a little more. I’d point to last year’s release, “Kimi ni Sakura Hirari to Mau”, as a good example of what this group can do. That release was cool. This release is…nice. Just barely.