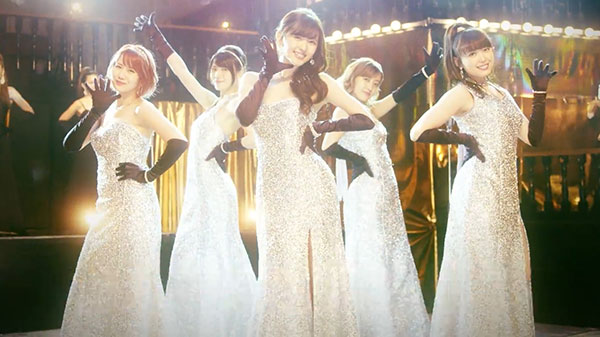 C-ute has been pretty low on my H!P priority list for a while now. Despite loving the members, especially the Goddess that is Yajima Maimi, their music just…isn’t for me these days. It’s not what I go for in general, nothing against them. However, this newest release has some good energy to it.

The video has a pretty retro feel to it. I feel like I’m saying this a lot lately, but it’s true. J-Pop loves to travel back to the more soulful times. This PV features only one set-piece, but it’s pretty pleasing to the eye with nice lighting and golden accents that allow the girls to stand out very well. There’s a few background band members that are easily missed if your eyes aren’t wandering too much. With Yajima Maimi on the screen, why would that happen anyway? I’m not biased at all, huh?

Speaking of their looks, the members of C-ute have all grown up pretty well, and do they look great in this PV or what? I’m seriously loving the silver sparkly dresses. They really are the focal point of establishing the mood in this PV. With the nicely lit set, the Shure Unidyne microphones, and a couple of backup band members and singers to boot, it really creates a pretty authentic retro feel.

The only potential complaint I might have about this PV is the choreography is pretty basic. It’s all filmed on the one stage, and what’s worse is there’s no dance shot to it. Just some pretty typical moves one would expect from this genre. Not that it’s surprising. It’s not like those dresses allow for anything too surprising. What’s there is done nicely, but as a long time fan of C-ute I do miss their more genki days. Sadly, that genre seem to be a thing of the past for them.

The song itself sounds a lot like much of C-ute’s recent offerings, but I think it has a bit more pop to it. The vocals are all pretty good and the instrumentals, while lacking depth, satisfy. It’s rare I discuss lyrics, but the lyrics to this song seem pretty poignant considering what’s doing on in the world. Even the song title alone makes you think. Like I said, modern day C-ute isn’t what I really go for with idol music, but I respect and like this release. It’s pretty gorgeous and has a bit of a message to it.