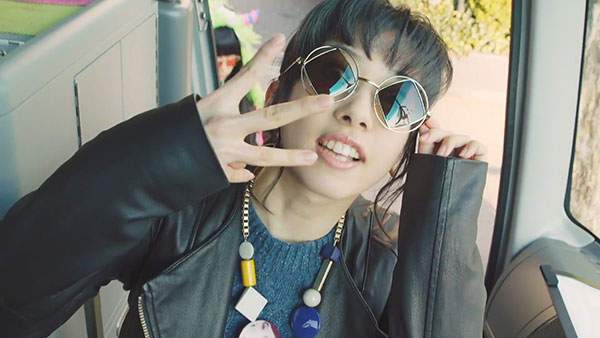 This week, I review some things off of my normal radar. Let’s see what glorious Nippon has in store! 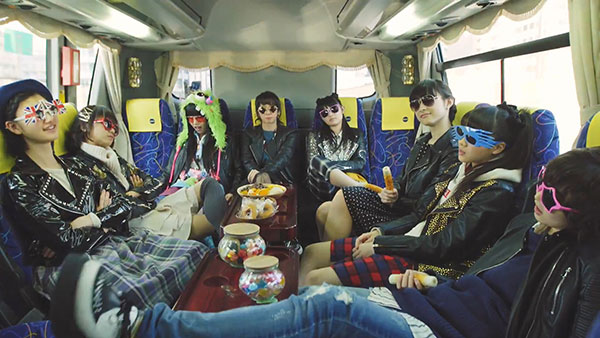 Ebichu totally rocked 2015. “Super Hero” and “Natsu Daze Johnny” were big hits with me. It appears they’re starting off 2016 with a new album, and the outlook is pretty good if this associated PV is anything to go on.

Ebichu has a tendency to produce pretty chaotic PV’s, and this one is no exception. It goes from reasonably calm studio shots, to unique takes on beach games, a bus tour, and beyond. There’s a lot going on but it’s all really fun to watch. Ebichu’s super high energy really shines in these shots as they’re always doing something. Even the studio recording shots contain a pretty generous amount of Ebichu wackiness. It’s high energy and really fun.

The outfits vary in some shots but for the most part the girls are decked out in leather jackets giving a pop-rock feel to the video that matches the song pretty well. In many shots, they’re also wearing some pretty wacky sunglasses. I could honestly do with or without those personally, as the girls look pretty fantastic in this PV.

There’s really not a lot of choreography to speak of. The fun of this PV lies in the energy of the shots, and the producer of this video definitely picked a ton of awesome clips. Every member has at least a couple of really memorable moments, such as Hirota Aika’s devilish stare into the camera at the 2:42 mark, or Mayama Rika looking like a total badass in pretty much all of the bus shots. Sorry if some bias is showing in these selections. In all, the video definitely lives up to the anarchy part of the title. It’s lawless, insane fun. I guess that’s Ebisu in general really.

The song is a pretty fun, but bordering on generic pop-rock song. It sounds like something PASSPO might do for a filler track, but if you know me, a comparison to any kind of PASSPO is a compliment. Aside from some yelling of numbers, there’s really no solo vocals to speak of in this one. The vocals for the chorus are fine. It’s not the best use of Ebichu’s voices that I’ve heard, but it’s good enough.

However, one awesome aspect of it is it reminds me of old school Puffy music. Now that I can get behind! It’s really that kind of energy that makes everything work both for the song and video. It’s fun. It’s high tension. It’s Ebichu. This group has come so far the past few years. It’s pretty incredible.