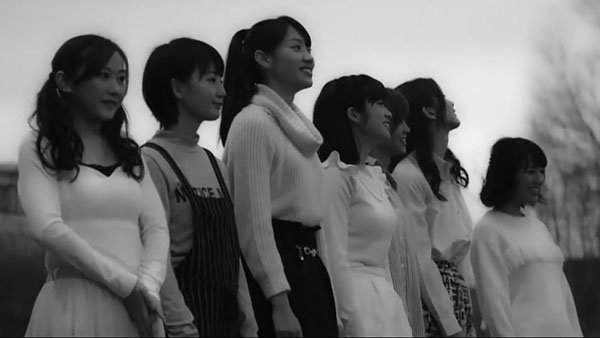 Last week I had a look at an A-side off of Up Up Girls’ new single and had a slightly mixed reaction to it. Well, we’ve been treated to a PV for a B-side song this week, and while it may not break any new ground or even showcase Up Up Girls’ dance skills, a nicely executed theme and some gorgeous member shots make up a pretty nice PV.

Right away this PV dives right into its extensive use of retro computer graphics. It’s not everyday a PV loads, or in this case “lodes” itself into memory and executes. These Commodore-esque shots are actually pretty cleverly done, featuring song lyrics and members’ names throughout. It may be a gimmick, but the thought that went into these shots makes them feel totally integrated.

Once the video “lodes”, we’re treated to a PV totally in monochrome. The consistency of the theme is actually pleasing to me. I would much prefer monochrome to bizarre Japan filter anyway. There are some moments of CGI around the live action shots featuring 8-bit graphics fairly reminiscent of Famicom-era games. They’re altered just enough to avoid a potential lawsuit, despite being referred to by name in a few cases. It all works very well together. The theme for this PV is very well done.

For better or worse the theme is all there really is to talk about with this PV. There are no uniforms to speak of. All of the shots feature the members in civilian wear. But hey, it’s Japan so you know they look great. There’s no dance shots, and the girls don’t even assemble as a group until about two-thirds of the way in. Even then, all they do is walk together and throw rocks into the water. Not their most exciting of videos by a long shot, but it’s held together by the really cool theme.

As far as the music goes, the song is great. It’s a little bit more dubstep-ish than their norm as far as the instrumentals go, but the vocals have a fantastic pace. Compared to many Up Up Girls songs, this one has a slightly slower tempo most of the time. It’s really nice to hear them be a little less rambunctious. This comes together with the lyrics of the song being a bit more serious than usual, creating a more mature tone. I think it worked out great for them. Definitely one of the better B-sides of this year so far.