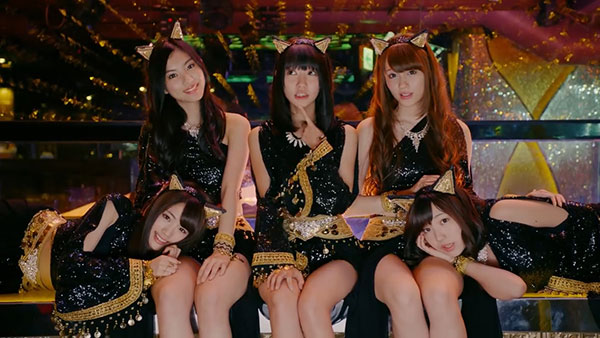 I really fell for Yumeado at the start of 2015. Their music is usually pretty awesome, they have a lot of high quality PV’s, and the girls themselves are hella attractive and pretty awesome performers, too. They started off this year on an awesome note with “Mai Jene!”, and it looks like they are going nowhere but up!

It’s really hard to not just immediately give this five stars. As a self-proclaimed “legs guy”, as the fandom says, I can’t even with the start of this PV. Granted I haven’t been following them for long, but my goodness is this group aging well. The outfits for this PV are an idol take on a belly dancer outfit. Not quite as revealing as the real deal, although legs are in ample supply along with a typical amount of midriff. They’re mostly black with gold features, including cat ears and even a tail in some scenes. Legs bias aside, they’re really awesome outfits.

The PV is filmed inside of a uh…well, it looks like a strip club to me. Maybe this is just some themed club in Japan but from my western perspective this is totally a strip club. There are a couple dozen extras dancing in the background. Their outfits are all pretty random and colorful. Luckily, these extras actually have some talent to them and add a nice touch to the video.

The PV has some choreography here and there, but more often than not features the members in simpler solo shots and interacting with the environment or each other. Sometimes literally. Kyouka and Yamada Akari go as far as sharing a kiss. Hey, whatever they wanna do, man, I support it. The dance shots are all nicely done. Yumeado has this amazing consistency to their performance. Be it a dance shot or just staring at the camera, they nail everything they do. I’ve felt this way since the first time I saw them, and they’ve only gotten better.

For the song, it’s pretty nice. The instrumentals get a lot of inspiration from that retro 70s J-Pop sound, but while it feels retro, it sounds modern. It’s a nice mix of old and new, paying homage rather than outright ripping it off. A lot of pop music these days tries and fails at this, but I think it’s well done here.

This song also has quite a bit more solo time for each member than their past couple of offerings, so it’s nice to see a more even spread going on with this group. As nice as they sound as a whole, they hold their own individually, too. Don’t get me wrong, they’re no Little Glee Monster, but they’re better than one might expect.

So all said and done, can I not give this five stars? Hmmm…I don’t think I can. Sorry. Either I’ve been brainwashed by the legs, or this is a rock solid release.

Or both. Yeah, let’s go with both.

Watch: YouTube (Official, Region Locked)
(As of the time of posting, there doesn’t seem to be a region free version anywhere. We’ll try to update when one is available but I’m sure most of you guys know where to go to find stuff.)