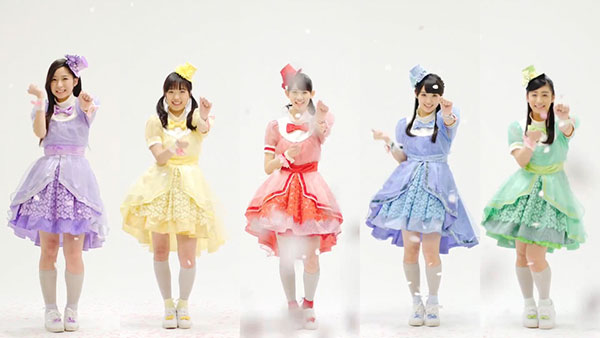 I was very late to the Team Syachihoko party. Around the time of “Tensai Bakabon” was when I started to realize their charm. Better late than never, I guess. Syachihoko takes a more mellow turn with this PV, and I gotta say, it turned out much better than I thought it might.

Right away, you’re going to see that this PV has a pretty unique gimmick. In a majority of shots, there are QR code scattered around the scene, or on the members themselves. I scanned a few of these just for review purposes and uh…huh. They seem to go to quite random things.

A majority go to Syachihoko related goods, but a few go to making of video’s from the PV scene they were in. There’s also a few that go to totally random things, such as a 15,000+ yen shirt on Aymyy, a Japanese girls fashion brand site that I’ve heard from other idol fans that they are doing a collaboration with. It’s actually a pretty clever way to get people to watch the PV over and over. Nicely done.

The video features several costume changes ranging from an idol-like outfit in each member’s color, which are quite gorgeous by the way, to fashionable wears, to seifuku, to questionably odd stuff. Well, I say odd, but by Syachihoko standards everything in this video is extremely tame. Almost totally normal, in fact. The lack of shock value is totally forgiven by how fantastic all of the girls look in every single shot. They really picked the outfits well for this PV and everyone looks “oshare” as hell.

Most of this PV is shot outdoors in various locations. Only a small portion is in studio. It’s all really nice looking and the filming is well done. It’s really cool seeing so many passers-by. For some reason, I feel like it compliments the song. Sadly I really can’t elaborate on where most of it is. My knowledge of Nagoya isn’t that great, and when I went there I only saw a small portion of it. It’s nice to know that Nagoya can be a bit more scenic, because the places I did go were not really that impressive.

I don’t know this group well enough to declare on oshi. I’ve had a bias toward Sakamoto Haruna at times, but the clear winner for this PV is Ooguro Mizuki. I’ve honestly not really noticed her before, but wow, she’s gorgeous. She also gets some of the nicest shots in the PV.

For the song itself, wow, I’m actually very impressed. When I heard it was pretty mellow compared to their norm, I was concerned. It also being an anime tie-in to the upcoming NHK series “Neko Neko Nihonshi” made me worried even further, as anime songs from idol groups tend to bend them away from their usual sound with low quality results. That is most definitely not the case here. It feels like a modern take on an old classic.

It is indeed very mellow, but it’s also quite smooth and great to listen to. The solo vocals are nicely distributed and it feels like everyone gets equal footing. It doesn’t have that anime tie-in (lack of) quality to it at all. It feels like any other rock solid release. For me, this single reveals that Syachihoko is definitely capable of more than what I’ve seen thus far, and that’s awesome. I’ll admit it took me a while to “get” this group, but I really can’t get enough of them now that I do.